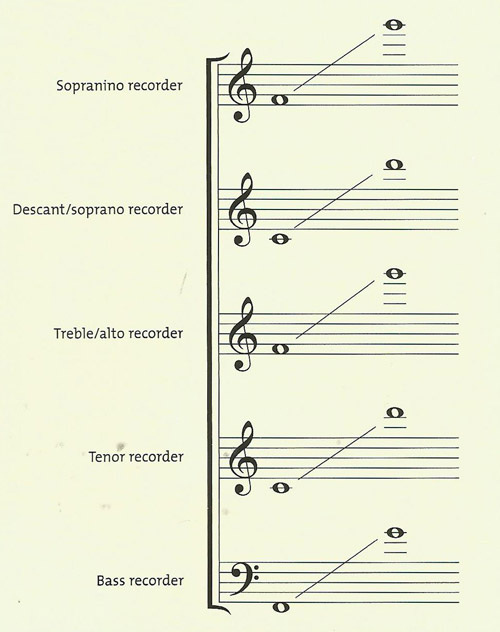 The ranges of various types of recorder.

The recorder is a wind instrument of which the commonest types are descant, treble, tenor and bass. Its main distinguishing feature is a thumb-hole on the back of the instrument. Also, the bore of the recorder tapers from the top to the bottom, rather than the reverse as with other wind instruments.

The origin of the name is uncertain. The word "record" has had several meanings over time, including "to sing like a bird". Perhaps it is the similarity between the recorder and bird song that gave rise to this name. Indeed, in the music of, for instance, Purcell and Handel, the recorder was sometimes used to imitate birdsong.

The first known examples of the recorder date from the Middle Ages. It became popular in the Renaissance and Baroque periods and then, surpassed by the concert flute, it largely fell out of use in the professional arena. At the beginning of the twentieth century, however, it was redesigned by Arnold Dolmetsch and subsequently enjoyed a remarkable revival, which continues today.

The ease with which the recorder could be played made it a perfect instrument for household use. In times where there was no recording and no broadcasting, it was a good medium through which to disseminate new music. Transcriptions of songs, arias, and even whole operas were made well into the 19th century.

The revival of professional interest in the recorder began in the early twentieth century when Arnold Dolmetsch (1858–1940) created a new design in the 1920s. Together with his son Carl, Dolmetsch altered the instrument's bore, redesigned the finger holes, and rescaled the size and positioning of the finger holes for modern pitch and equal temperament. Much of the renewed popularity of the recorder is due to the surge in demand for historically informed performance, in which performances take place on exact replicas of instruments used in the time that the music was written.

The modern recorder has a range of just over two octaves. This mean that instruments of different sizes must be used to access the full pitch compass, particularly in an ensemble. Recorders are most often tuned in C or F (referring to their lowest pitch, available when all the finger holes are covered). The standard instrument is a descant, with a lowest note c'. Above that is the sopranino, with a lowest note of f '. Below the descant are the alto, lowest note f, the tenor, c, and the bass, F. The relative simplicity of the instrument has made it enduringly popular, and it is still the first instrument that many children learn.

All recorders are end-blown duct flutes. The main body of the instrument contains a column of air, open at the bottom. The head joint of the instrument is partially blocked, leading the player's breath to a sharp edge, which splits the air in two, to induce sound vibrations. One part continues into the instrument's air column, agitating it into vibrating; the other part is forced out through a window in the head joint and away from the instrument.