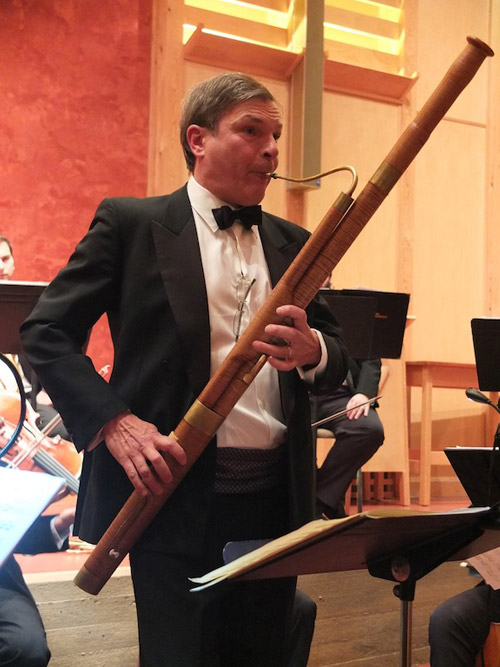 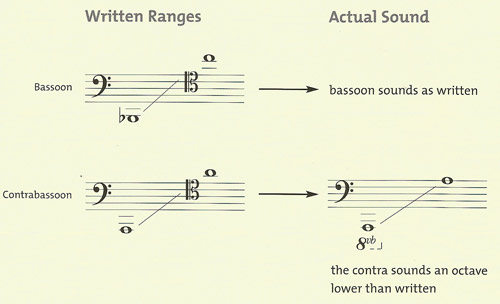 The bassoon is a double reed instrument of conical bore and is usually the lowest of the standard orchestra wind group. Usually constructed of maple, the bassoon's total bore length of 100 inches (254 centimeters) requires that it be doubled back on itself and held by a seated player at an angle across his body. The name comes from the Italian bassone, meaning 'big bass', and bassoon is the form used in England since the time of Purcell.

As ensemble music became more popular during the 16th century there was increased demand for wind instruments that could elegantly negotiate the lower ranges. Large versions of wind instruments intended for the higher registers lacked volume and agility and were often difficult to play. Various elements of existing instruments – the bass recorder's crook and the shawm's double reed, for instance – were combined to create the bassoon's predecessor: the dulcian.

Meaning 'sweet' (presumably in comparison with the raucous shawm), the dulcian, standing at nearly 1 meter (3 feet) high, was constructed from a single piece of wood, into which were cut two conical bores that were connected at the base. With eight finger holes and two keys the dulcian, overblowing at the octave, had a range of C to g'. At the same time, versions of the dulcian were made out of separate pieces of wood, which were then bound together, giving rise to the term 'fagot' because of its resemblance to a bundle of wood.


Development of the bassoon

The dulcian was gradually developed over the ensuing centuries. Keys were added, the distribution and size of finger holes was experimented with, the wood altered, the range extended, and crook and bell redesigned. During this period, it acquired the name bassoon, probably derived from the term 'basson', which was often applied to bass-register instruments.

During the nineteenth century, versions of the bassoon were created by Adolphe Sax and Theobold Boehm, though neither were ultimately successful. It was Carl Almenraeder's (1786–1846) innovations between 1817 and 1843 that led to the creation of the modern bassoon. His work was continued by J. A. Heckel and the Heckel bassoon – as it came to be known - has been adopted as the standard design.

At 134 centimeters (53 inches), the Heckel bassoon, made of maplewood, is constructed of four joints, which combine for a total tube length of 275 centimeters (108 inches). The bassoon is held at an angle with a crook enabling the double reed to sit comfortably in the player's embouchure. With 21 keys on the standard design, the Heckel bassoon has a compass extending from B♭' to at least a' and possibly up to e". Some composers, notably Wagner, have written for a bassoon that can play a low A', but this requires an extra-long bell and an additional key that most players believe destabilizes the instrument too much to become a standard feature.

Sounding an octave below the bassoon, the contra- or double bassoon is a conical tube 550 cm (217 in) long. Doubling back on itself five times, it stands at around 120 centimeters (47 inches) high and rests on a steel spike. Like the bassoon, it was Heckel who developed the contrabassoon as we know it today. Capable of sounding a B♭" or even an A", it requires a much longer and wider double reed than its smaller sibling. Heckel's version was completed in 1877, and one of the first examples of its use occurs in Johannes Brahms' (1833–1897) Symphony No. 1. There were earlier versions of the contrabassoon, however, which can be heard in Handel's Music for the Royal Fireworks (1749) and Ludwig van Beethoven's (1770–1827) Fidelio (1805).