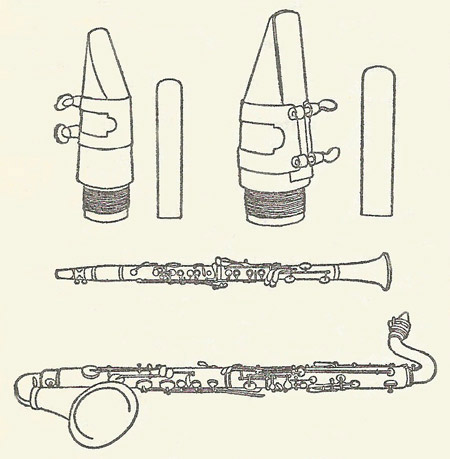 Parts of a clarinet. 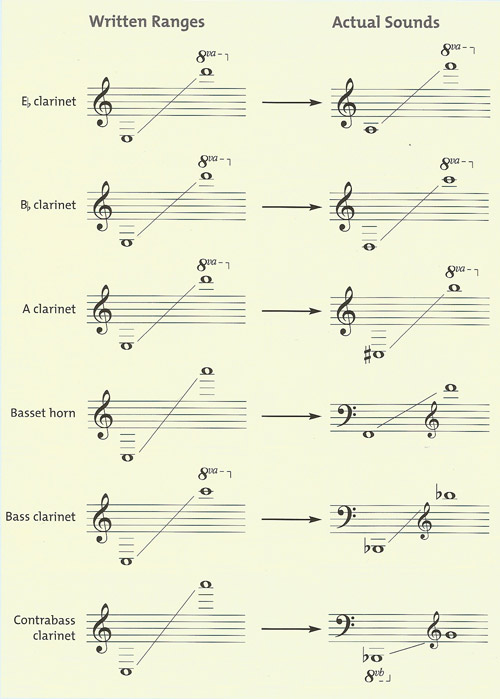 Written ranges and actual sounds of various kinds of clarinet.


Invention of the clarinet

The clarinet was invented during the last decade of the seventeenth century by the form of J. C. Denner (1655–1707) of Nuremberg, it being a development of the recorder and shawm families. Denner is said to have 'improved the shawm and invented the clarinet, which does not mean that the clarinet is merely an improved shawm, with the shawm becoming obsolete, for the Denner form continued to make shawms for many years, calling them by their relatively new French derivative calumeua. It would appear that the newly-invented clarinet was meant to occupy a range higher than the rather low-pitched shawm; only when the shawm finally became obsolete in the eighteenth century was the clarinet family extended downwards to fill the gap.

Although Denner invented the clarinet before the turn of the century, it was not until 1710 that the actual name appeared in the Nuremberg archives; by what name Denner called his clarinets when he first sold them is not clear. 'Clarinet' means literally 'little clarino', since the tone of early examples was similar to that of the trumpet. At first clarinets were often pitched in the trumpet keys of C and D. Vivaldi used clarinets in his oratorio Juditha Triumphans and Airs à deux clariettesou chalumeaux by J-P. Dreux were published in Amsterdam; both works appeared in 1716, so the clarinet was already widespread in Europe within two decades of its invention.


The chalumeau: ancestor of the clarinet

By the middle of the seventeenth century, the recorder had become very popular but it had a lot of drawbacks – most obviously, its lack of volume. Attempting to overcome this flaw led directly to the invention of the chalumeau. Instead of splitting a stream of air on a sharp edge to induce sound vibrations, the chalumeau used a single reed attached to a tapered mouthpiece. Passing a stream of air over the reed agitated it, which in turn caused the column of air contained in the instrument's body to vibrate.

In spite of the improvement in volume, the chalumeau was able to produce accurately a limited range of pitches at the lower end of its range. The 'speaker key', operated by the thumb, was invented around 1700 specifically to allow access to the higher pitches. The close link between the chalumeau and the clarinet is retained in terminology: the low end of the clarinet's range is still referred to as the chalumeau register.


Pitch of the clarinet

Like all wind instruments, the clarinet's pitch is a function of the length of the vibrating air column: covering or uncovering finger holes therefore alters the pitch. The use of keys to facilitate this began with the chalumeau and continued with the clarinet. The clarinet as we know it today came about as a result of a collaboration in the early 1840s between clarinettist Hyacinthe Eléonore Klosé and maker L. A. Buffet. Buffet used the mechanical principles of Theobald Boehm – to create a system of keys that is the standard today. (Unfortunately for Buffet, the design carries Boehm's name in spite of the fact that the latter had nothing to do with it.)

The modern soprano clarinet consists of five sections: mouthpiece, barrel, upper or left-hand joint, lower or right-hand joint, and bell. These sections are joined by tenon and socket joints lined with cork to ensure a snug, airtight fit. The upper and lower joints together constitute the body. The mouthpiece is tapered on the upper side. On the lower side is a slot, over which is fitted a single reed attached by a metal ring. The chamber inside the mouthpiece makes a smooth transition to the main body of the clarinet, which is bored cylindrically.

Strangely enough, there seems to be no purpose to the barrel joint that separates the main body from the mouthpiece. The main body carries the keywork and the bell opens out the cylindrical bore to a funnel. The bell is only of use in projecting the lowest notes so the clarinet's range – the majority of notes are projected almost entirely through the side holes. Most modern clarinets are made of African blackwood; although there are plastic and metal alternatives, no material has yet matched the blackwood for beauty of sound.

Uniquely among wind instruments, the clarinet behaves as though it was a stopped cylindrical pipe – even though it is open at the bell end. Acoustically this means that there is a predominance of low vibrations in the clarinet's sound: its lower register sounds an octave below that of a flute or oboe using the same length of pipe. This gives the lower chalumeau register a particularly dark, rich sound.

The sound-wave formation of the clarinet means means that it overblows at the twelfth instead of the usual octave. It is this peculiarity that gave rise to the 'speaker key', which is designed to help the overblown notes – known as the clarinet register – to speak.

If all the members of the clarinet family are taken into account, it is the orchestral instrument with the widest range of all. On one occasion a performance of Mozart's Symphony Number 40 in G minor was given at the Brussels Conservatory with all parts played in their correct registers by clarinets. Since then, a further extension has been made at the very bottom end of the range with the invention of the somewhat superfluous and perhaps unplayable, sub-contrabass clarinet.

The clarinet is a transposing instrument – that is, the music is not notated at the same pitch as the resulting sound. Transposition is calculated in relation to the pitch C; an instrument in F, for example, sounds F when playing a written C. This is to maintain a relationship between fingerings where several instruments exist of the same basic design but of different sizes (and therefore different total pitch ranges). The music is written in the same way for each instrument, so switching between them is as simple as possible.

The standard clarinet is in B♭, so sounds a whole step lower than written. Most clarinettists also use a clarinet in A, which sounds a minor third lower than written. Although both instruments sound almost identical, music composed in sharp keys (i.e., G major, D major, A major, etc. and their relative minors) used to be impossible to finger on a B♭ instrument. Developments in key mechanics have made it much easier, but there is still an audible sense that a clarinet is better in keys closely related to its own.

The E♭, or piccolo, clarinet sounds a minor third higher than written. It is common in military and concert bands, often used in the orchestra and hardly ever used in solo or chamber music. It has a shrill, penetrating tone that can easily carry over a full orchestra. For this reason, it is usually used in moments of extreme tension.

The basset horn is a member of the clarinet family, though not a clarinet itself. It is pitched in F and has a range that extends down to a sounding F. Its dark, slightly veiled timbre is more like that of a chalumeau than a clarinet. While resembling the main body of the clarinet, the upper section bends toward the player, but the bell bends away and is generally made of metal. The instrument is thought to have been devised in the 1760s, but it is unclear whether it was developed from a clarinet or a chalumeau.

Not to be confused with the basset horn, the basset clarinet is a soprano clarinet in B♭ or A whose range has been extended downward to a written C (thus sounding B♭ or A). The instrument is believed to have been invented by the clarinettist Anton Stadtler, a colleague of Mozart's.

Generally pitched in B♭, the bass clarinet sounds an octave below its standard soprano counterpart, with a lowest pitch of D♭ or C. It looks very similar to a basset horn but usually has a full crook at both the mouthpiece and bell end, with the instrument doubling back on itself before angling out. A spike is normally attached to the lower end of the main body so that the bass clarinet can be rested on the floor during playing.

There are examples of bass clarinets from the late eighteenth century, but it only came into its own after the developments of Adolphe Sax in the early nineteenth century.

The bass clarinet's size necessitates changes to the keywork of its smaller siblings. Not only do the keys have to reach further, the holes they cover must be large – too large, in fact, for any to be covered by the fingers alone. Fortunately, the instrument's size allows for the additional key mechanisms that compensate for these issues.

The alto clarinet occupies a similar range to the basset horn but has a much fuller, brighter tone, enabling it to blend more effectively with other instruments. It is normally pitched in E♭and fingered similarly to the standard soprano clarinet.