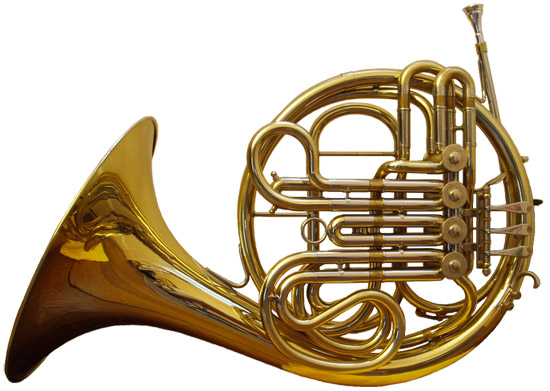 Range of horn in F/B. 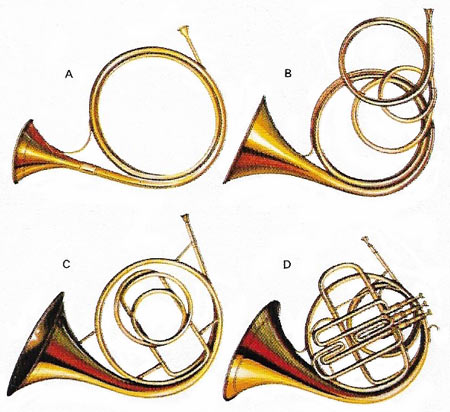 The French horn is a direct descendant of a coiled hunting horn (A) that originated in France about 1660. It changed its form because when it was first used in orchestras, players were obliged to change horns when the music changed key. Crooks, extra lengths of tube, were introduced (B) and later both crooks and a tuning slide were added (C). The development of the piston valve (D), early in the 19th century, gave the horn a full range of semitones. Other members of the orchestral brass are the trumpet and trombone, with cylindrical bores, and at the lower end of the pitch range the tuba, which has a conical bore like the French horn.

The early history of the French horn is bound intimately to that of the trumpet. Both instruments were made of brass (see brass instruments), both were sounded by buzzing lips, both were used to give signals during the hunt. The first clear distinction was made in France in the late seventeenth century. Jean-Baptiste Lully's (1632–1687) ballet La princess d'Elide, performed at Versailles in 1664, is unequivocally scored for cors de chasse (hunting horns). An engraving of a scene from the work clearly shows circularly coiled horns as opposed to the more rectangular trumpets.

Two horns from this period survive – one by Starck from 1667 and one by Crétien from 1680. They clearly show the key characteristics of the modern horn: the circular spiral coil and conical bore (the trumpet at this time was cylindrically bored). French makers were vital in the development of the horn, and its 'French horn' title is an accurate reflection of the instrument's origins.

Having no valves or keys, the horn could only play notes in the harmonic series of its fundamental pitch. Instruments were initially made with different fundamentals for use in music of different keys. Early eighteenth-century Vienna, however, saw the first use of crooks. In conjunction with the development of crooks, a new playing technique appeared. During the early 18th century, players discovered that the tuning of a note was affected by inserting the hand into the bell. Partially closing the bell lowered the pitch by around a half step, and fully closing the bell raised it by a half step. While both actions altered the instrument's timbre, it was possible to disguise the change created by a partial closure almost completely.

The technique of hand-stopping, as it became known, made the whole chromatic scale available to the horn, revolutionizing the instrument. By the middle of the 18th century, hand horn playing was the standard in orchestras across Europe. The horn concerti of Haydn and Mozart, along with Beethoven's horn sonata all use this technique. In fact, it became so popular that players, conductors, and composers were reluctant to leave it behind. All of Johannes Brahms' (1833–1897) orchestral parts are written for the hand horn, even though the horn was by then fully equipped with valves; hand-horn techniques were still taught in the 1920s.

Despite this popularity, though, instrument technology continued to move forwards and by the early 1800s there was a growing demand for instruments that produced an even color across their entire compass. The first attempt at this was the curiously named 'omnitonic' horn, first constructed by J. B. Dupont in Paris around 1815.

In truth, the omnitonic horn was not an attempt to achieve a fully chromatic instrument. The development of hand-horn technique had not done away with the need for crooks; players still needed the fundamental pitch of the horn to be closely related to that of the music being performed. The omnitonic horn was devised to eliminate the need to change crooks. It did this by combining all the different crook lengths together on the horn's main body. The player could select a particular crook by turning a dial, and play the horn in that key using hand-stopping techniques. It was a cumbersome and heavy instrument, though, and despite the attentions of some distinguished makers, it never caught on.

The early-nineteenth century was a time of great change in the brass world. The invention of the valve had provided an efficient way to access the full chromatic range, and many new instruments flooded the market. Two makers, Stolzel and Bluhmel, both devised valved horns between 1811 and 1814. The former used a tubular piston valve and the latter a box-shaped piston valve. Not long after, in 1822, Luigi Pini invented the first horn to use rotary valves.

Band players and soloists quickly took up this new horn, but there was reticence among orchestral musicians. The obvious advantages of the valved horn – consistent tone color, ease of execution, a fully chromatic lower register – proved too great to resist, however, and by the late 1800s it had become the standard.

The modern horn is made in five parts: body, bell, valve system, mouthpipe and mouthpiece. It is conically bored except for the central valve system and made of brass alloy. The mouthpiece differs significantly from most other brass instruments in being 'V'-shaped; the player places his lips at the widest part, and the shank leaves at the point to join the mouthpipe. This shape of mouthpiece produces a softer, mellower sound than the bright cup-shaped mouthpieces of the other brass.