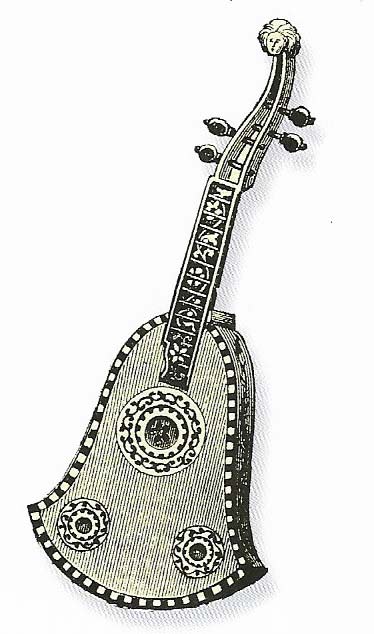 The flat-backed citern was the most important plectrum-plucked instrument of the Renaissance, and its popularity is attested by numerous literary references. 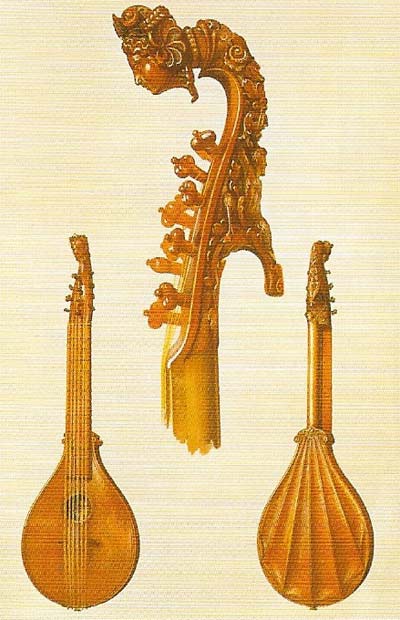 This finely-carved cittern is said to have been made by the great Italian stringed instrument maker Antonio Stradivari in 1700. 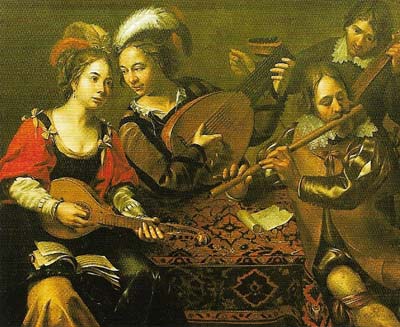 This early 17th-century painting by Wouter Pieterz Crabeth shows a cittern (left) being played with a lute and flute. 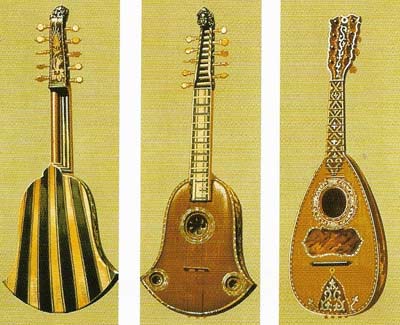 Back and front views of a bell cittern, which became popular in Germany in the 17th century. The Neapolitan mandolin is distinguished from other lute-type instruments by the pronounced increase in depth of vaulting at the body's lower end.

A cittern, also called a cither or cithern, is a musical instrument popular in western Europe in the sixteenth to eighteenth centuries. An instrument resembling a lute, but with a shallow, flat back, its four pairs of wire strings were played with a plectrum until the end of the sixteenth century and thereafter often with the fingers. In England, during the eighteenth century, is was miscalled the English guitar. Of the same general type were the orpharion, or pandore (or bandore or badora), a bass instrument. The Spanish bandurria and laud are also forms of cittern.

The cittern evolved from the citole a plucked lute-like instrument played by 13th-century French troubadours. Made from a single piece of wood, the citole had a flat, pear-shaped body and a short neck, and was usually fitted with three single brass or steel strings that passed from a flat pegdise to a frontal string-holder.

In different parts of Europe the citole assumed various shapes, all of which had a protuberance at the bottom to which the strings were attached. The Italian style was a "spade-fiddle" shape, with the shoulders swept upwards to form points. In France, the shoulders developed into wings and the oval sides became either straight or slightly waisted. The English and Germans preferred a citole of a holly-leaf shape with the sides forming points at the intersections of concave curves.

During the 15th century a bridge was added to raise the strings off the soundboard, the pegdisc became a pegbox and the neck was fitted with 12 or more brass frets. The quill was abandoned and the four courses of strings began to be plucked with the fingers. The citole seems to have lasted longest in Spain, but by the early 16th century it had become universally transformed into the cittern.

A characteristic of the cittern, which was very popular in the 16th and 17th centuries, was its unusual neck, which was half cut away from behind the fingerboard on the bass side. The resulting overlap formed a "channel", which facilitated very rapid shifts to and from the high positions that were so often required in the instrument's solo repertory.

During its early years the cittern underwent many modifications, including increasing the number of courses of strings from five to 12. In 16th-century France and northern Europe the cittern eventually became standardized as a four-course instrument, with the top two courses of strings doubled and the other two trebled.

Towards the end of the 16th century a larger cittern with extra bass strings appeared. Called the ceterone, it was developed as a continuo instrument, its extra strings being secured to a separate pegbox, much like the theorbo. In the early 17th century a small English version of the cittern appeared. One person who enjoyed playing the Englisches Zitterlein was J. S. Bach's grandfather Veit, who, its is said, played it while working in his mill.


Demise of the cittern

By the mid 17th century in England and France, the cittern had degenerated into a barbershop instrument and was fast losing out to the increasingly popular guitar. By the mid 19th century the guitar had completely taken over and, apart from a few pockets in rural areas of Germany and Switzerland, the cittern had died out by the beginning of the 20th century.

During the 17th century Italian and French builders began to make larger cisterns with two pegboxes. These archcitterns had from five to seven melody gut strings and six or seven off-board strings on the lines of the theorists. Popular in the 18th century, they were about 1 meter (3 ft) long, and reportedly as loud as a harpsichord.