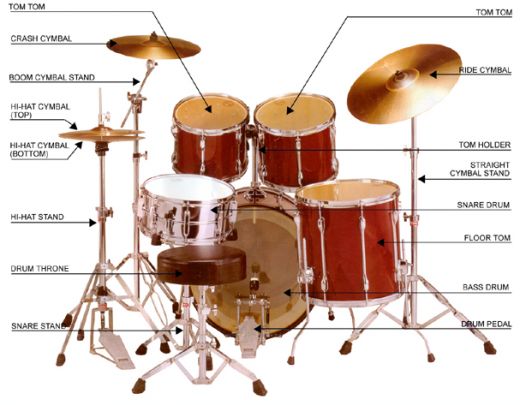 A drum-kit with three different types of cymbal. 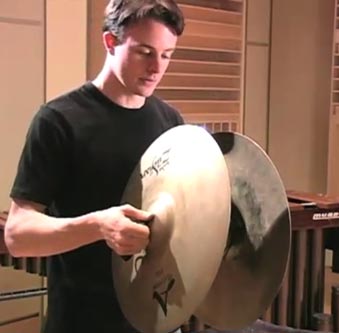 A cymbal is a copper or bronze disk struck with a drumstick to ride or emphasize beats. Various types of cymbals are an integral part of the modern drum kit. Two cymbals can also be played together, either by hand as in an orchestra or a marching band, or via a foot pedal as in the case of a hi-hat. A cymbal is often mounted on a boom – an arm that extends from the cymbal stand to allow greater positioning around the drumset. Drummers often use booms to bring the cymbals in closer to them.

Also called a bounce cymbal, a cymbal (18–21 in/45–52 cm diameter), larger than the rest, that the drummer "rides" much of the time while playing a standard beat. It is designed to have a clean articulation and a dry timbre.

As the name suggests, a crash cymbal (or simply, a crash) is used for single crashes in solos or to emphasize a certain beat in a solo. The sound it makes is a sustained, ringing tone with a pleasing mix of overtones. They generally come in sizes 15 to 18in.

Also called simply a splash, a quick-sounding cymbal with short sustain. Splash cymbals are small, typically 6 to 10in diameter, although they may range up to 14in.

A China cymbal or pang cymbal (14–16 in/35–40 cm diameter) has an upturned rim and imitates a Chinese gong. Finger cymbals, commonly used in belly-dancing and mid-Eastern music, are a pair of tiny cymbals mounted on the hand and played by striking together.

Suspended and crash cymbals used in western orchestral music, rock, pop, and jazz are developed from Turkish cymbals and have a central boss or bell falling to convex shoulders. They are designed so that only the outside edges touch when they are crashed together, and the fundamental note is difficult to hear when they are played. Cymbals used in traditional Southeast Asian music are generally played as crash cymbals and are developed from the Chinese cymbal (bo or jingbo), which have either no bell or a squared-off bell, falling to convex shoulders and a wide flat rim. The edge of the cymbal may also be turned up. Turkish cymbals make a smooth, round sound, and Chinese cymbals make a short and abrasive sound.

Cymbals and metal clappers have been played in central Asia and ancient Egypt since around 1200 BC, from where they migrated into India and China. Cymbals appear frequently in the Bible, and are also found in ancient Greek and Roman art and literature. Early cymbals varied in size and were bowl- and funnel-shaped in cross-section, as well as the flatter cymbals like those found today. They were generally played as crash cymbals, often by dancers. Small brass finger cymbals (6 cm in diameter) attached to the thumb and first finger – called zagat in Arabic and zills in Turkish – have been used by dancers across the Middle East, North Africa, and India since AD 500.

The cymbal is cast from an alloy of copper, silver, and tin into a metal disk, which is reheated and passed several times through a rolling mill, and then tempered in water and hammered to straighten it into a circle. The bell of the cymbal is formed and the individual sound of the cymbal is created by hammering the shoulders or bow of the cymbal by hand, and shaving or cutting grooves or tone rings along the edges and underside.

The sound of the cymbal should be brilliant and give a quick response when struck. Although an unpitched instrument, the thickness, weight, and diameter of a cymbal and the curvature of the bell and the bow contribute to its timbre. Typically, a symphony orchestra would have four or five suspended cymbals, and pairs of crash cymbals ranging from 30–60 cm (12–24 in) diameter to provide a suitable range of tone colors.

The cymbal first appeared in the orchestra in the late-eighteenth century. Some bass-drum and cymbal orchestral parts were written to be played by one player. One crash cymbal would be mounted on the top of the bass drum, so that the player could play the bass drum with one hand and the cymbal with the other.

Christoph Willibald Gluck (1714–1787) composed one of the first independent cymbal parts in his opera Iphigenie en Tauride (1779). Berlioz was the first composer to specify a cymbal struck with beaters. A suspended cymbal can also be scraped lightly with a metal beater or coin, as in Claude Debussy's (1862–1918) La Mer (1905), or played with a cello or double-bass bow, which allows the higher harmonics in the cymbal to sound and give an effect like that of a musical saw. Adding loose rivets to the circumference of a suspended cymbal makes a sizzle cymbal. When struck, the rivets vibrate against the cymbal creating a continuous buzzing or sizzling sound.

Orchestral clash cymbals are played by passing the face of one of the cymbal against another a slight angle with a brushing action, and then damping them against the chest. Different dynamics are achieved by allowing more or less of the face of the cymbals to strike, and by applying more upper-body strength to the velocity at which the cymbals are struck together. Sliding the tip of one cymbal across the other creates a very soft sound without an initial percussive attack. A cymbal roll a due is played by rubbing one cymbal in a circular motion against the other.