Figure 1. The Who's Keith Moon. 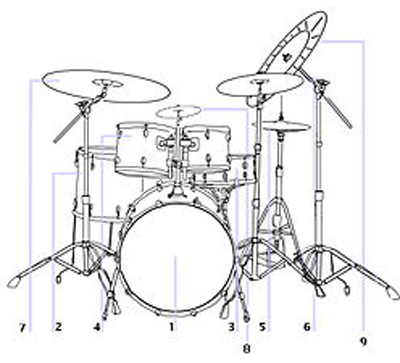 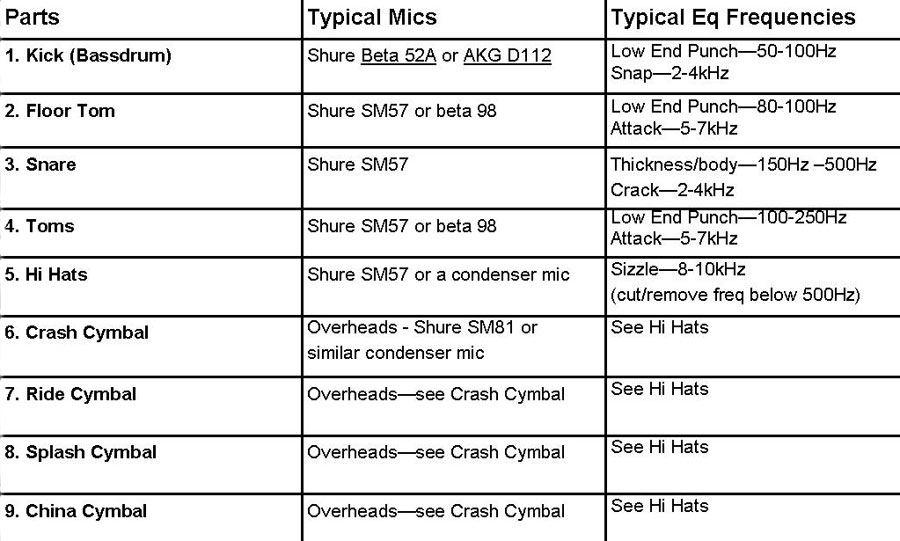 A drum kit is a collection of drums and cymbals used in all styles of rock, pop, jazz, and blues. A typical drum kit, or drum set, comprises a bass drum and hi-hat cymbals played with foot pedals, a snare drum, two or three tom toms, and suspended cymbals.

The drummer sits on a stool. A right-handed player will play the bass drum with the right foot, the hi-hat pedal with the left foot, and will place the snare drum immediately in front of them between the knees, with the tom toms arranged from left to right in descending order of pitch. The suspended crash cymbal is placed by the hi-hat and the suspended ride cymbals are placed over the tom toms.

The drums are constructed like the orchestral snare drum and bass drum. The bass (or kick) drum is 45–60 centimeters (18–24 inches) in diameter and 35–45 centimeters (14–18 inches) deep. It is placed on the floor with the playing head vertical. The pedal is clamped to the hoop of the drum. It has a chain or spring action and bounces back after being struck. The outer head of the drum may be decorated with a logo, and the cavity of the drum is often filled with an absorbent material to deaden the sound. Two tom toms are mounted on a stand on the bass drum, and the largest tom toms, or floor toms, stand on the floor on legs. The tom toms are unpitched, 20–45 centimeters (8–18 inches) in diameter and 18–40 centimeters (7–16 inches) long, and usually tuned to sound lower than the snare drum.

Rhythms are played on the ride or bounce cymbal, 45–52 centimeters (18–21 inches) in diameter, which is designed to have a clean articulation and a dry timbre. Crash cymbals, 20–40 centimeters (8–16 inches) in diameter, are used for single crashes in solos and drum fills, and are built to have a more brilliant ringing sound with a pleasing mix of overtones. The hi-hat comprises two matched cymbals on a stand operated by a foot pedal.

Drummers often customize their kits to include extra drums and cymbals. These might include the Chinese or pang cymbal, 35–40 centimeters (14–16 inches) in diameter, which has an upturned rim and imitates a Chinese gong; the splash cymbal, 15 centimeters (5 inches) in diameter; and the sizzle cymbal. In the late 1970s and the 1980s, drummers of stadium-rock bands like Asia, Kiss, and Queen used very large drum kits that might include 25 to 30 items, among them two bass drums, two hi-hats, extra tom toms, bongos and roto-toms (tunable tom toms with no shell), multiple cymbals, and gongs.

The drum kit originated in the multiple drum sets in theatre and music-hall pits at the end of the nineteenth century. The drummer played the percussion part on a combination of bass drum, snare drum, cymbals, and tom toms, and added in special effects on a range of other instruments, including woodblock, triangle, tambourine, castanets, slapstick, and whistles.

The modern drum kit came into being with the invention of foot pedals for the bass drum and hi-hat in the jazz bands of the 1920s, in which drums, bass and rhythm guitar, banjo or piano formed the rhythm section. Previously, the bass drum and snare drum were placed side by side and played with sticks, or the bass drum was placed on the floor and kicked (which is why the bass drum is sometimes called a kick drum).

The original foot pedal-operated cymbal, or low-boy, rested at floor level, which made playing on this cymbal with sticks awkward. The hi-hat, which places the cymbals at chest height, was developed by Gene Krupa (1909–73) – drummer in the Benny Goodman Orchestra – and the Zildjian cymbal company in the late 1930s. The advantages of this new cymbal were quickly recognized by drummers and the hi-hat became a standard part of the kit.

The pulse played on bass drum and hi-hat with the feet provides the basis of most drum-kit rhythm. The drummer adds the snare-drum part with the left hand and the cymbal part with the right hand, playing either on the hard-hat or the ride cymbal. Improvisation is a key aspect of drum kit playing, and the drummer may vary the rhythm by adding extra beats on the bass drum and snare drum.

The drummer may also vary a rhythm by altering the snare-drum and cymbal sounds. These include playing a click on the snare drum, by laying the head of the stick across the drum to hit the rim of the drum and the head at the same time, and using brushes or rattan sticks. The bell of the cymbal can be used to imitate a cowbell. In progressive rock, Latin, and jazz styles, the drummer often plays more complex rhythms between the bass drum and snare drum.

Short drum fills and longer solos are added to vary the rhythm and mark out the musical structure. In rock, pop, blues, and most jazz drumming, fills are played every fourth, eighth, or sixteenth measures, and are timed to end on the first beat of the next phrase.

Longer solos can be built up by playing snare-drum rudiments around the kit, developing rhythms already played in the piece and free improvisation. Snare-drum rudiments are developed by splitting them between snare drum, bass drum, and tom toms, by adding flams, drags, and ruffs, and syncopated accented patterns. Longer drum solos are found in many styles of music, and became a feature of swing and jazz modeled on the work of Gene Krupa, Buddy Rich (1917–87) and Art Blakey (1919–90), who made full use of the different sonorities available from the kit. Rock drummers in the 1960s and 1970s – including John Bonham (1948–80) of Led Zeppelin, Phil Collins (1951–) of Genesis, and Keith Moon of The Who (1946–78) – developed extensive drum solos.