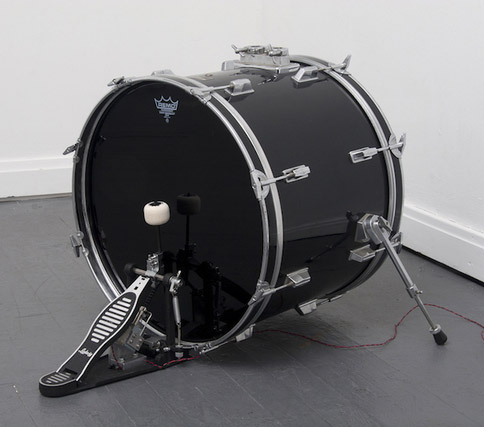 A bass drum is a large drum, with origins in the Middle East, that produces a note of low definite or indefinite pitch. Three commonly seen types of bass drum are the kick drum of a drum hit (pictured here), the orchestral bass drum, and the pitched drum of a marching band or drum corps.

The modern orchestral bass drum, which is 100 centimeters (70 inches) in diameter and 50 centimeters (20 inches long) is double headed and rod tensioned. Although single-headed orchestral bass drums were popular in the late-nineteenth century, the enclosed cylinder of air in a double-headed drum gives a greater depth of tone and more carrying power at a range of different dynamics. The bass drum is usually played with large soft felt or woolen beaters.

Orchestral bass drums are usually mounted on a stand, but in a marching band the bass drum is held in a harness in front of the player. With the snare drum or tenor drum, they start the music with three or five paced rolls to establish the tempo, and give aural clues during the march – such as the double tap played toward the end of the final phrase as a signal that the music is about to end.

A bass drum can be very loud. The lambeg drums of Northern Ireland, which are about 90 centimeters (36 inches) diameter and 60 centimeters (24 inches) wide, are capable of playing at above 120 dB – the same volume as a pneumatic drill. Like the African djembe, the drumheads are tuned almost to breaking point and a fundamental tone like a fizzing or buzzing sound builds up inside the body of the drum, which can be heard a mile or more away. Lambeg drums are played with curved canes, rather than traditional beaters.