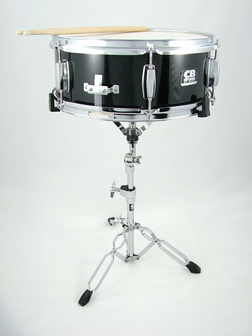 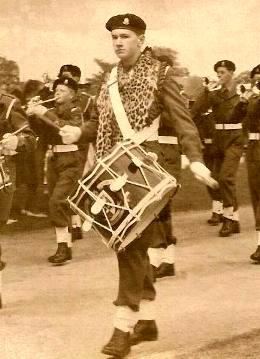 The snare drum is a drum that has skins stretched across both the top and bottom of its shell, with wire or nylon snares set to rattle against the bottom skin while the drum is played. The snare drum – its sound often associated with military bands – is the drum most often used for the backbeat in rock music.

The snare drum has eight to 20 stretched snares held against the lower or snare head by a screw clamp, which holds the snares taught. The snares respond to the vibrations that occur between the two drumheads as the upper, or batter, head is played. The batter head is kept tight to help the bounced strokes that are essential for playing snare-drum rudiments. It also has an internal damper to keep the resonance of the drum to a minimum.

The traditional way of playing the snare drum – with the left stick held horizontally and the right stick extending from the thumb and index finger – originating from when it was played when marching, suspended from a harness and hanging over the player's right hip. Many players now used the 'matched grip', where both sticks are held pointing forward. This grip is also commonly used for playing the xylophone and other keyboard percussion, and the timpani.

Snare-drum technique uses single, double, and bounced strokes to achieve a range of effects. Single strokes are played with alternate hands (Right Left) and doubles as RR LL. Playing a series of double strokes produces an open roll. If a single-stroke roll is played (R L R L etc.), but each stroke is left to bounce indefinitely and the hands are alternated quickly, it produces a closed or buzzed roll. Other rudiments like paradiddles (RLRR LRLL) promote equal strength in both hands, and ornamental drags and flams are used to decorate rhythms.

The tenor drum, 38–45 centimeters (15–18 inches) diameter and 30 centimeters (12 inches) long, is deeper in tone than the snare drum. It originates from the medieval tabor, and normally has two heads and no snares. The tenor drum can be played with wooden sticks or soft mallets. It was used by foot regiments to provide rhythms for marching and drilling from the end of the 18th century, and is often played with flourishes of the sticks in marching-drum corps.