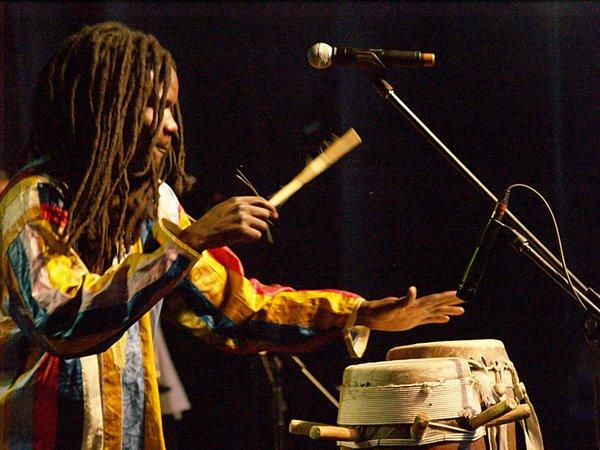 Drumming in West Africa is a rural indigenous art form, and it accompanies dance and singing. Master drummers are members of the griot class of professional musical entertainers. These men lead the drumming and promote the tradition by teaching students.

The two main types of West African drum are goblet drums and hourglass drums made from a hollowed-out single log (like the djembe and kpanlogo), and those constructed like a barrel with wooden strips bound by metal (like the ashiko). The multilayered polyrhythms music of West African drumming is constructed from interlocking patterns of rhythms and includes singing and dancing.

Drum ensembles utilize a range of different sonorities, and drummers use various playing techniques with sticks and hands to achieve different sounds. Drum ensembles usually also include an agogo bell, which leads the ensemble, providing a pulse and starting and stopping signals, and a calabash rattle covered with shells or seeds. They are used to accompany singing and dancing at secular and sacred entertainments and ceremonies.

The djun djun and djembe form the ubiquitous West African drumming ensemble. The djun djun, 40 centimeters (16 inches) in diameter and 53 centimeters (21 inches, long) is found throughout West Africa. It is a cylindrical double-headed bass drum with cowskin or goatskin heads. The fur is usually left on the skin around the sides of the drum to dampen higher frequencies and thus create a deep, resonant sound. Small, medium, and large djun djuns are called sanga, kenkeni, and dunumba respectively. The djun djun is usually worn in a harness and played with two sticks – one strikes the head with the head and the other plays a bell tied to the side of the drum.

The ashiko, approximately 35 centimeters (14 inches) in diameter and 53–72 centimeters (21–29 inches) long, is played throughout sub-Saharan Africa. It is a low-sounding, cone-shaped drum with a goatskin head. The ashiko, kpanlogo, and bougarabou share the same playing technique as the djembe.

Kpanlogo is a dance and drumming tradition originating from the Ga tribe of Ghana. The master drummer in the kpanlogo ensemble plays the solo drum part, and other percussionists play supporting rhythms on drums, rattles, and bells. The kpanlogo drum, approximately 22 centimeters (9 inches) in diameter and 60 centimeters (24 inches) long, is often highly decorated and has an antelope skin, laced to tuning pegs that protrude from the body of the drum.

Sabar drums are royal drums unique to the Senegambia region. Six basic tones can be produced on each of the drums. Using sticks and hands, it is possible to create a complex musical texture. The sabar ensemble also includes tama (talking drums). These drums, also called the dondo (Ghana) and dun dun (Nigeria), are double-headed laced hourglass drums (17 cm/9 in diameter and 48 cm/19 in long) played under the arm and squeezed to alter the tension and pitch of the drum heads. This creates high and low sounds that imitate tonal African languages.