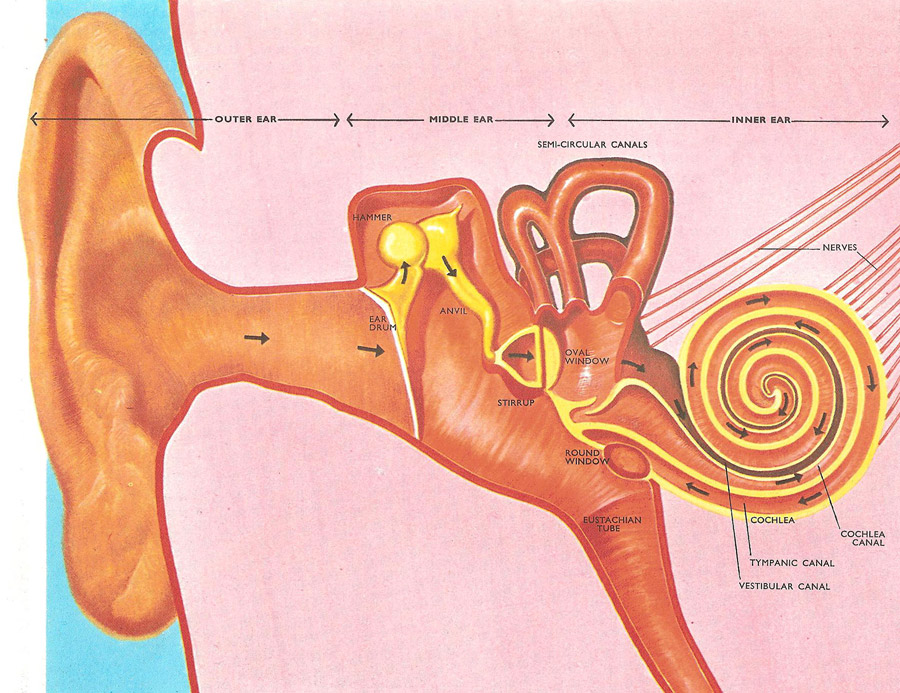 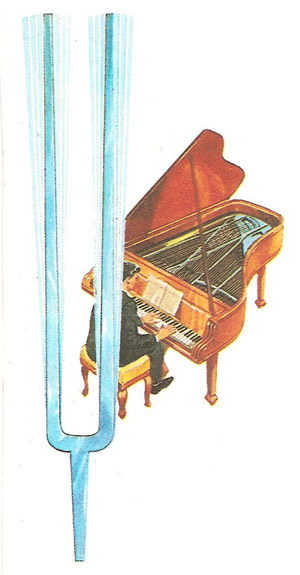 When a vibrating tuning fork is placed on the piano frame, to which the strings are attached, one string vibrates in sympathy. In the ear movements of the fluid in the cochlea cause parts of the basilar membrane to vibrate in sympathy.

The human ear is a delicate organ, parts of which control the body's sense of balance and parts of which are concerned with receiving sound signals before they are passed as impulses along a nerve to the brain.

When a taut string is plucked it will vibrate and make a sound. The vibrating string pulses and pulls the air around it and in this way vibrations are transmitted through the air to our ears.

Sound waves are collected by the outer ear which is bounded on the outside by a flap of skin called the pinna and on the inside by a taut membrane, the ear drum.

Sound waves make the ear drum vibrate in sympathy. This movement of the ear drum is conveyed through the middle ear (a cavity which contains air) by three tiny bones to the oval window which is at the innermost side of the middle ear. Beyond the oval window is the inner ear. The part of the inner ear that is concerned with hearing is called the cochlea, a coiled horn-like tube filled with fluid. Vibrations of the oval window produce pressure changes on the fluid in the cochlea which affect tiny, sensitive hairs that link up with nerve fibers which join to form the auditory nerve and which carry the impulses to the brain.

In the brain these impulses are translated as sound. The ear does not hear – it merely receives sound waves which are transmitted as impulses to the brain. It is the brain which interprets these as sound.

The middle ear is connected to the back of the throat by a narrow tube – the eustachian tube. This is normally closed by a small muscle but when we swallow or cough the tube opens to admit air to the middle ear from the throat. This ensures that the pressure in the middle ear is the same as that in the outer ear (i.e. equal pressures are maintained in either side of the ear drum).

The wall of the cochlea is a rigid substance, bone, and since the cochlea is filled with fluid (and fluids cannot be compressed) the to-and-fro movements of the oval window cause pressure changes on the fluid. These pressure changes cause the basilar membrane, to which the sensitive hair cells are attached, to vibrate in unison. The accompanying stimulation of the hairs on the hair cells results in impulses passing along the ear nerve of the brain.

The cochlea, if it is straightened out, can be seen to be a tapered tube containing three fluid-filled canals, the two outer of which are in communication with each other at the apex of the cochlea through a small opening. The oval window closes the end of one of these canals (the vestibular canal) while another membrane, the round window, closes the other (the tympanic canal). When the oval window bulges inward (i.e. is pushed by the stapes) the pressure change in the fluid in the canals cause the round window to bulge outward. This is probably a safety device which provides pressure relief.

The ear receives a musical note as a sound wave and the brain, from the information it receives by way of nervous impulses, is able to determine the pitch, loudness, and quality of the note.

It is thought that the 'judgment' of pitch is, at least in part, due to the structure of the basilar membrane. This contains many fibers which are arranged at right-angles to the length of the cochlea. Fibers at the base of the cochlea are shorter than those at its apex and when different sounds are received by the ear different parts of the basilar membrane vibrate to a greater extent than other parts. Low frequency sounds (those with long wavelengths) cause the fibers at the upper end of the basilar membrane to vibrate, while higher frequency sounds (those with short wavelengths) cause the fibers nearer the base of the membrane to vibrate.