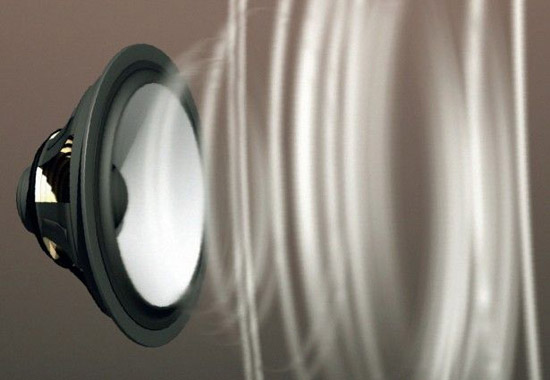 Sound from a loudspeaker. 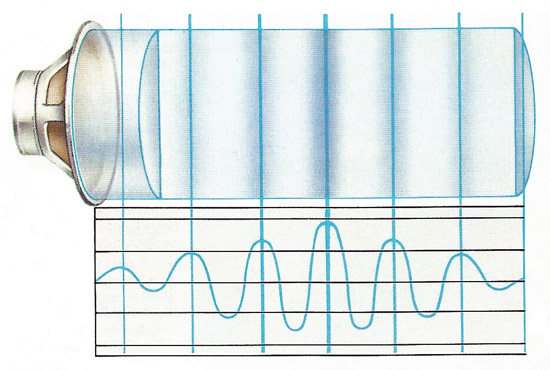 A sound wave consists of pressure differences, shown as dark and light bands. The curve shows how pressure changes with time. This wave has a constant frequency (a single note) but decreases and increases in intensity. It would have a 'wah' sound. 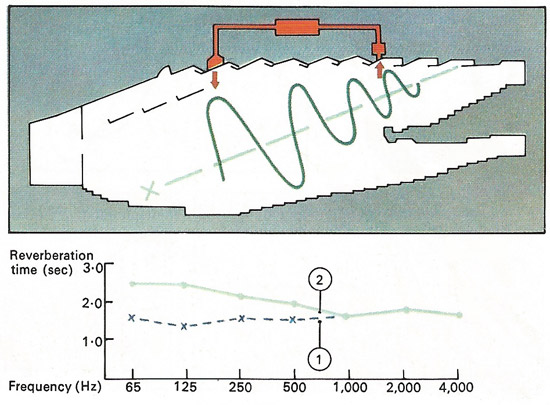 The acoustics of a London concert hall were altered when it was discovered that the reverberation time – the time taken for the sounds on stage to die away in the hall – was too short for the lower frequencies. Electronically amplified resonators were placed in the ceiling to add echo to the hall. The graph shows the reverberation time before (1) and after (2). The result was a more balanced and pleasing sound throughout the hall. 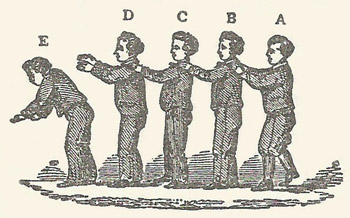 From Tyndall, On Sound, 1875: "I have five young assistants, A, B, C, D and E, placed in a row, one behind the other, each boy's hand resting against the back of the boy in front of him. E is foremost, and A finishes the row behind. I suddenly push A; A pushes B and regains his upright position; B pushes C; C pushes D; D pushes E; each boy, after the transmission of the push, becoming himself erect. E, having nobody in front, is thrown...

Sound is the vibration of air molecules or variation in air pressure that can be sensed by the ear. The pattern and rate of audible vibrations give sound its unique quality. The range of auditory perception is approximately 20 Hz (cycles, or fluctuations, of air pressure per second) to 20,000 Hz. Air pressure fluctuations outside of this range are not audible to the human ear and are called subsonic (less than 20 Hz) and ultrasonic (more than 20,000 Hz) vibrations.

Sound is generated by a friction-producing force such as a drum stick hitting a cymbal, a bow moving across a cello string, or a vibrating speaker cone that sets the surrounding air molecules into motion. From the point of impact or disturbance, sound waves or patterns of vibrating air molecules radiate outward through the atmosphere to the ear like the ripples of water on a pond.

Most musical sounds vibrate in orderly repetitive patterns (with the exception of percussive instruments such as rattles and shakers). In contrast, noise produces random, chaotic wave patterns. Each type of disturbance in the atmosphere produces a distinct pattern of vibrations. These patterns of vibrating air molecules give a sound its unique quality. The sound is composed of three elements: loudness, pitch, and timbre.


From instrument to brain

All sound begins as movement. A drumskin moves upon being struck; a taut string vibrates when plucked; a column of air moves across vocal chords. In turn, each movement displaces adjacent molecules of air. Each molecule then nudges and displaces its neighbor – rather lie a succession of billiard balls bouncing into each other, or a "Newton's Cradle", the familiar desktop toy. In this way, the original movement – or kinetic energy – from the sound source is transferred through air to the listener.

This movement of air molecules causes the listener's eardrum to vibrate in a pattern directly related to the movement of the original sound source – the struck drum or vibrating string. The movement of the eardrum is then translated into electrical nervous energy (interpreted by the brain as sound) via a complicated system of tiny bones and a membrane suspended in the fluid of the inner ear.

The loudness of a sound can be measured with a decibel meter and the result given as a number of decibels 9dB). Strictly, the meter measures the intensity of the sound, which is related to the pressure differences in the sound wave. The scale is logarithmic – an increase of 10dB is produced by 10 times the intensity. Loudness varies with the cube root of intensity, so that a sound 10dB greater sounds about twice as loud. The human ear does not hear all frequencies of sound in the same way and a low sound is perceived as being less loud than a high sound of the same intensity.

The number of compressions that pass in every second is called the frequency of the sound wave and is measured in hertz (Hz), equal to cycles per second. This scale is not logarithmic and a note of 440 Hz (the A above middle C in music) sounds twice as high as, or an octave above, one of 220 Hz (the A below middle C). In other words, the higher the frequency, the higher the pitch.

Noise does not have any particular pitch and covers a wide frequency range. Very loud noise is dangerous as well as a nuisance, because continuous exposure to a sound of more than 100 dB – the levels produced by jet aircraft, for example – soon results in a permanent reduction in hearing ability. Low-frequency noises are particularly hazardous because they do not seem to be as loud as higher sounds and tests have shown that very high levels of low-frequency sound and infrasound (sound below the hearing range of the human ear) quickly result in vertigo, nausea, and other physical effects.

Acoustic engineers work to reduce noise and improve sound quality in many ways. In concert halls the reflection of sound inside the hall is rigorously controlled to provide an exact amount of echo and give the best quality sound. This may be assisted by electronic amplification, although very loud music loses clarity in a concert hall. Some recording studios have completely absorbent walls to remove all echo and ensure total clarity whatever the type of music being played.