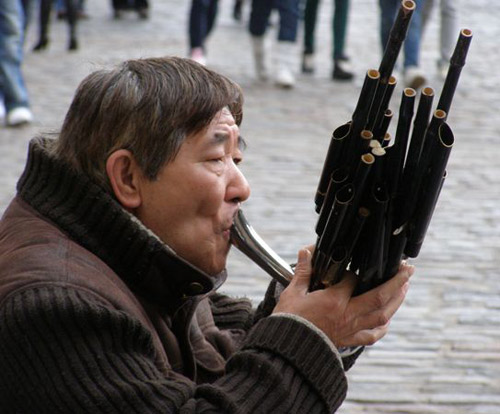 The birthplace of free reeds seems to have been eastern Asia. There, it is typical to place a small free reed, made of metal or bamboo, into a bamboo tube cut to the appropriate length so that its air column resonates at the reed's natural frequency, increasing the volume and allowing it to sound, or to stop it, by opening or closing the airway.


What is a free-reed instrument?

If the tongue of a Vietnamese dan moi (Jew's harp) is bent slightly so that its rest position is no longer in the plane of the frame, it is possible to activate it without plucking, simply by blowing or sucking (depending which way it is sprung), to produce a steady, non-decaying note. The instrument has thus been transformed from a 'plucked idiophone' to a free reed. Unlike the single and double reeds, a free reed doesn't produce its sound by opening and closing an airstream; rather, it produces it by its own vibration.

Bunches of such reed pipes, tuned to chords or a scale, are attached to a single mouthpiece; each tube has a hole that the players keep covered with their fingers unless they wants that particular note to sound.

The best-known of these 'mouth-organs' is the Chinese sheng, which looks a little like a metal teapot with a thicket of 17 or more thin bamboo pipes emerging from its lid, with the spout to blow or suck down. Instruments working on the same principle can be found in the neighboring countries of Korea, Laos, Thailand, Borneo, Vietnam, and Japan.

The Japanese shois is descended from a version of sheng introduced from China in the 8th century. The Lao and Thai khaen has two rows of bamboo pipes, each with a tuned reed, that extend both above and below the wind-chest; the pipes can be very long, up to a couple of meters, as can those of the almost bow-and-arrow shaped laot and Thai gaeng, and the similar south Chinese lusheng, both of which have a long tubular wind-chest and fewer pipes.

The pipes of the hulusheng ('gourd sheng'), an older but still played form of which the modern sheng is a development, have lower openings flush with the bottom of the gourd wind-chest; the player can bend notes by closing these with his thumb.

This principle is taken further in the small range of single-pipe free-reed instruments, of which the best is known is the ba-wu of China's Yunnan region. It looks like a bamboo transverse flute, but a 'V'-shaped brass free reed is set into it where a flute's blowing hole would be. By blowing through the reed and fingering as one would a flute, the reed is forced above its fundamental into a scale of just over an octave, with an alluring dark, clarinet-like tone. There are kindred single-tube free-reed instruments in Laos, Thailand and Vietnam. The Vietnamese ala and ding tac ta are sucked rather than blown.


The spread of free-reed instruments

There are few details, but it seems likely that it was from the sheng that all western free-reed instruments have been developed. Organ-builders were early on the scene in the eighteenth century, but soon there were the first mouth-blown instruments such as the aeolian or aeolina, which was a simple set of free reeds mounted side by side. Like most western reeds, their vibrating tongues were bolted on to a plate rather than cut from it.

Soon the modern harmonica or mouth organ began to appear – essentially a row of reeds mounted side by side on a reed plate to make a diatonic or chromatic scale, with a slotted 'comb' to direct the breath to one of two reed-banks tuned a half step apart. On tremolo harmonicas, pairs of reeds are slightly detuned to give a beating effect. Sophisticated playing techniques have developed, including bending notes (a style evolved by blues players) and manufacturers, early on in Germany and other parts of Western Europe, but now also back in the birthplace of the free reed, East Asia, are constantly creating new models to suit, and to add to the huge and ingenious range which exists, including the splendidly chugging bass harmonica.