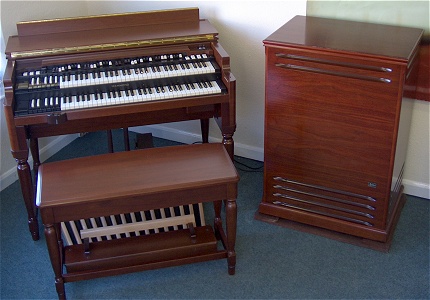 Hammond organ (B3) and Leslie speaker.

Although Hammond claimed to have no musical ability at all, he was a gifted inventor who graduated with an honors degree in mechanical engineering from Cornell University in 1916. Following a period or armed service in France during World War I, he took up the position of chief engineer with the Gray Motor Company in Detroit. The invention of a silent, spring-driven clock gave Hammond enough capital to strike out on his own, and in 1928 he founded the Hammond Clock Company, which made a range of electric clocks, driven by another of his inventions – the synchronous electric motor.

However, as other clock companies went out of business during the Great Depression, Hammond's determination to remain solvent led him to develop other products, and he soon turned his attention to music. Though no musician himself, he recognized the importance of music and was keen to produce a system that could bring high-quality music-making to the domestic market.


Development of the electric organ

In developing the electric organ, Hammond turned for inspiration to the underlying principles of Thaddeus Cahill's ill-fated Telharmonium. Aided by his company treasurer (and church organist) William Lahey, Hammond used his engineering skill and experience to develop an electromechanical system of tone-wheel generators coupled with a keyboard. The Hammond tone-wheel organ was patented in 1934 and the Model A went into production in 1935, with Henry Ford and George Gershwin among the first customers.

The now-legendary B3 was produced in October 1955 and quickly became a lasting favorite with musicians of all genres for its distinctive sound and versatility. The B3 is housed in a large wooden cabinet on four spindle legs, with separate power amplification and speaker system. The instrument is equipped with a pair of 61-note keyboards and a 25-note radial removable pedal board. The sound generated by the instrument is controlled by a series of rocker switches and drawbars. These drawbars lie at the heart of the Hammond sound, allowing the player to build up rich timbres by combining pure tones in differing combinations – in the same way that a church organist would use stops to combine pipes of different lengths.

Another defining feature of the Hammond sound was not invented by Laurens Hammond but by Don Leslie (1911–2004). The Leslie speaker was developed to overcome the shortcomings that Leslie felt to be inherent in the sound of the Hammond organ. Noting that the instrument sounded much more impressive in large halls, Leslie began experimenting with ways of introducing reverberation and motion into the sound. The result was the rotating speaker system that bears his name.

The Leslie speaker cabinet looks like a large chest of drawers and contains a 40-watt tube amplifier, a rotating treble horn, and a rotating bass speaker. It was designed to produce two particular effects – the 'chorale' (when the speakers rotate slowly) and the 'tremolo' (when they spin quickly). However,a third effect exploited by many players was made possible by disconnecting the slow motors in order to make the change from 'chorale' to 'tremolo' much more exaggerated.

Hammond continued to produce different models of electric organs, all of them based on the original tone-wheel technology, until 1975. The company continued to make organs using electronics and digital technology, but it went out of business in 1986, only to be bought by the Suzuki group the following year. New instruments such as the new Body B3 and the XK3 use modern digital technology to emulate the vintage sound so beloved by many keyboard players.

The characteristic Hammond and Leslie combination can be heard on countless jazz, rock, gospel, and blues recordings, including such classic tracks as Procul Harum's 'A Whiter Shade of Pale'.