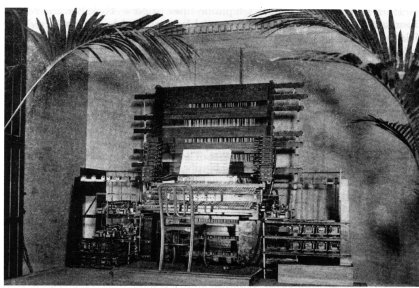 Widely regarded as the earliest example of a purely electronic instrument, the Telharmonium was patented in 1897 by Thaddeus Cahill (1867–1934), a lawyer and inventor from Washington, DC. It pioneered several important technologies. The sound was generated by a series of electromechanical tone wheels (rather like the Hammond organ), each of which produced a pure tone sine wave – one per note. Using the technique of additive synthesis, Cahill included additional tone wheels, the output of which could be used to color the sound and produce different instrumental timbres.

The sound was controlled by multiple sets of touch-sensitive, polyphonic keyboards, each with 36 notes per octave, tunable to frequencies between 40 Hz and 4,000 Hz. The instrument was usually played by two performers (four hands) and repertoire tended to be popular classics of the day by composers such as Bach, Chopin, and Rossini.

Although the Telharmonium contained some extraordinarily forward-thinking technologies, it was doomed to failure. For a start, it was simply enormous. In addition, telephone users complained that the Telharmonium music could be heard across the network, intruding on conversations. Facing with growing competition from the new Wurlitzer organ and wireless transmissions, Cahill's company went bankrupt. Only three Telharmoniums were ever built – none survive and sadly, no recordings of this remarkable instrument exist.

Although a small number of performances were given in front of live audiences, Cahill's vision was to transmit music to listeners down the phone lines. He achieved this by connecting paper cones to ordinary telephone receivers in order to amplify the sound sufficiently. Cahill's work predated the invention of the amplifier by some 20 years.