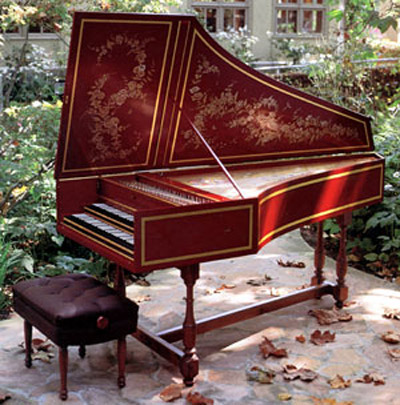 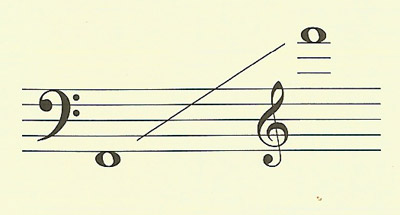 Range is dependent on country of origin, manufacturer, and period but is likely to be within the four-octave span F–f'''.

A harpsichord is a keyboard instrument found ubiquitously in wealthy households throughout Europe, and later in America, from the late sixteenth to the early nineteenth centuries. Apart from the organ, it was the grandest and most versatile of keyboard instruments until the advent of the mature pianoforte in the mid- to late-eighteenth century. There were three shapes: the 'grand' form, resembling a grand piano; the oblong, often called spinet or virginal; and the upright, which is very rare.

The date of the invention of the harpsichord is uncertain. It's first mentioned in the rules of the Minnesingers by Eberhard Cersne, in 1404, which places its invention in the preceding century. It was known in England in the late fifteenth century, because it is mentioned in a manuscript dated 1502, where it is alluded as being no novelty at the time. The Ruckers family were the great makers in Antwerp in the sixteenth and seventeenth centuries. In the eighteenth century Kirkman, and later Broadwood and Shudi, were the famous makers in London.

Although it became a fixture in many homes, the harpsichord was put to other uses. It provided an essential degree of rhythmic incisiveness and harmonic foundation in virtually every instrumental combination from the trio sonatas of the early Baroque to the earlier symphonies of Haydn two centuries earlier. Well before the 1820s, though, the instrument had all but disappeared, overtaken by the rapidly developing and increasingly powerful piano.

The definitive element in the harpsichord's mechanism is the 'jack' – a slender, upright piece of wood, mounted at the far end of a key and topped with a small artificial plectrum (comparable to the end of a quill pen and made either of hardened leather or from the wing-feathers of birds such as ravens, crows, or condors). When the key is depressed, the jack at the other end is propelled upwards, plucking the string as it passes. On the downward passage, a wooden 'tongue', pivoted on the jack and originally sprung with a boar's bristle, allows the jack to pass the string without plucking it again.

Slotted into the jack, next to the tongue but just above the plectrum, is a 'damper' – usually a wedge of felt or other soft cloth – which prevents the string from vibrating when the key is at rest, just as it enables the vibration when the key is depressed. The earliest and simplest harpsichords had one jack and one string for each note or key, and could thus be made very small and easily portable. Later harpsichords may have as many as five strings to each note and as many as three keyboards (as with the organ, these are generally known as 'manuals'). In instruments such as these, the mechanical challenges are vastly more complex. The essential principle, however, remains the same.

The strings themselves, prior to the harpsichord revival in the late-nineteenth century, were made variously of iron, copper, brass, and even steel – often in combination, with a view to achieving a wide range of tonal variety. In modern harpsichords, they generally consist of steel.

Among the factors affecting harpsichord timbre is the placement of the jack relative to the length of the string. A string plucked near the bridge will have a distinctly different character and feel from one plucked near the center. Equally, the volume (and its tonal character) will vary according to the number of strings activated at any particular moment.

The harpsichord proper (as distinct from its smaller siblings the virginal and the spinet) has two keyboards, or manuals, controlling two different sets of strings and several stops, on the model of the organ, by which various combinations of jacks and strings can be brought into play at the discretion of the performer. In some of the bigger instruments, the stops can be controlled by pedals, allowing the hands to remain at the keyboard without the risk of scramble. These became a standard feature of English harpsichords from the middle of the 1760s, while knee levers performed the same function in many French harpsichords from the late 1750s.

The two-manual harpsichord is effectively a pairing of two separate instruments, one on top of the other. A classic example of their juxtaposition can be heard in Bach's Italian Concerto , in which he contrasts the full, brilliant sound of the surrogate orchestra, with the lighter tone of the 'soloist'. On many of the bigger instruments, there is a coupler mechanism by which one keyboard can play as two, controlling both instruments at once.

While devices such as knee levers did much to bring an ever-wider range of sonorities to the instrument they did not address what came increasingly to be seen as the harpsichord's most serious limitation – its inability to emulate the smooth transitions from one dynamic level to another that characterize the human voice and all wind and bowed string instruments.

To this end, there emerged a number of ingenious but ultimately rather unwieldy devices, enabling the player to raise and lower the lid, or, as in the case of Burkat Shudi's aptly named 'Venetian swell' mechanism (1769). in which a system of shutters directly above the strings could be opened and shut to whatever aperture suited the player's musical intention (just as they are in the standard Venetian blind).

Although many believe that concern for tonal and dynamic variety in the harpsichord came about in the 19th century, there were efforts to address this issue from earlier times, in Thomas Mace's 1676 publication Musick's Monument, he describes in some detail a mechanism dating from the first half of the seventeenth century comprising four pedals, which cause the 'whole instrument to Sound, either Soft or Loud, according as he shall chuse to Tread any of them down'. Mace had one made which, in all its combinations, gave him 24 varieties of tone color, including a hand-operated lute-stop. In the next century, C. P. E. Bach (1714–1788) cited a similar invention. In his Versuch das Clavier zu spielen (1759), by which the number of stops in operation can be increased and decreased by means of pedals without interrupting the playing, thus securing gradual changes in volume that could only otherwise be demonstrated by the clavichord and the piano.

Well before the decline in their fortunes in the late-eighteenth century, harpsichords had been living a double life, so to speak – as musical instruments on the one hand (often of the very highest craftsmanship), and as items of furniture on the other. Their cases were often decorated by the finest artists of their day, making them both figuratively and literally works of the highest art. Indeed, history is in the debt of these artists. Their work alone prevented many of these wonderful instruments from being broken up and incinerated once their musical sun ad set. This was particularly true of those made by the Ruckers dynasty of Antwerp which were sent to all parts of the world.