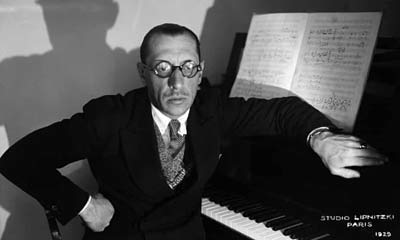 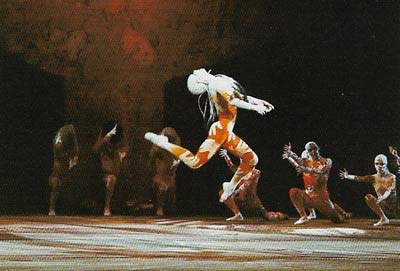 A scene from Stravinsky's third Diaghilev ballet, The Rite of Spring.

Stravinsky was arguably the greatest – and certainly the most versatile – composer of the 20th century. He was keenly receptive to new trends – from neo-classicism to 12-tone music – and perceived the advantages of a protean approach to composition. He also shed his personal skin several times throughout his long life, acquiring two wives and three changes of nationality.

The son of an opera singer, Stravinsky went to school in St Petersburg, and began piano lessons when he was nine. On a summer vacation in the country he met Rimsky-Korsakov, who became his teacher and mentor. His early Piano Sonata in F sharp minor was performed at Rimsky-Korsakov's house, and a Symphony in E flat and the orchestral fantasy Feu d'artfice (Fireworks, strongly influenced by Debussy) were largely written under the elder composer's tuition. Stravinsky had no other formal musical education; during this time he spent a couple of years reading law at university, but found it uncongenial. He left in 1905 and the following year he married his cousin Katrina Nossenko, who bore him four children.

In 1909 the Scherzo fantastique and Feu d'artifice were performed in St Petersburg. In the audience was the impresario Sergei Diaghilev (1872–1929), whose celebrated Ballets Russes employed the dancer Mikhail Fokine and the designers Léon Bakst and Alexandre Benois. Diaghilev lacked a composer for his 1910 Paris season and decided to try out the young Stravinsky with a commission for L'oiseau de feu (The Firebird), based on a Russian folk legend. Stravinsky's brilliant and colorful score strongly influenced by his Russian forebears including Balakirev, Tchaikovsky, and Rimsky-Korsakov – was a huge success.

His next score for Diaghilev began life as a concert piece for piano and orchestra, but then turned into Petrushka, based on a grotesque tale of lust and murder in a Russian puppeteer's booth. Another huge success at its Paris premiere in June 1911, Petrushka conjures up a vanishing world of Russian peasant life, complete with exotic and exhilarating dances for Cossacks, coachmen, wet-nurses, and a host of other characters.

During 1912 Stravinsky worked on his third Diaghilev ballet, Le Sacre du printemps (The Rite of Spring). Its premiere at the Théâtre des Champs-Elysees on 29 May 1913 caused a riot among its outraged audience. Even now, the primitive violence of Stravinsky's score – especially when coupled with Nijinsky's explicit choreography (the ballet concerns an ancient fertility rite in which a young virgin is selected for ritual sacrifice) – still packs an electrifying punch.

In 1914 Stravinsky's first opera, Le rossignol (The Nightingale, based on Hans Christian Andersen's fairy-story), was produced under the aegis of the Ballets Russes at the Paris Opera. (Five years later Stravinsky arranged the music as a symphonic poem, Le chant du rossignol, which was choreographed as a ballet by Leonid Massine with designs by Henri Matisse.)

When war broke out the composer and his family took refuge in Switzerland, where he worked on a new ballet score, Les noces (The Wedding), scored for four-part chorus, four soloists, four pianos, and percussion ensemble. Stravinsky's researches into Russian folk music for this project also inspired several secondary works, including the burlesque Renard (1915–1916).

By 1918 Stravinsky had already abandoned the lush orchestral resources of his pre-war ballets in favor of more sparsely scored, chamber-orientated works. These included L'histoire du soldat (The Soldier's Tale), for three actors, dancer, and small instrumental ensemble) and the ballet Pulcinella, based on a commedia dell'arte theme with music "arranged" from fragments attributed to Pergolesi, at the suggestion of Diaghilev. Pulcinella – which ushered in Stravinsky's absorption in neo-classicism – was first performed at the Paris Opera on 15 May 1920, with decor and costumes by Picasso. Stravinsky later arranged the music as suites for cello and piano and for violin and piano.

After the war, Stravinsky decided to make France his home, settling in Paris and Biarritz. The early 1920s saw the composition of several purely instrumental works, including the Symphonies of Wind Instruments (1921), dedicated to Debussy's memory, and the Concerto for Piano and Wind (1923–1924). He also worked on Mavra: a one-act opera buffa (a comic opera) based on Pushkin, and completed the orchestration of Les noces. These two works marked the end of his "Russian" period. At the same time, he began an affair with a married actress, Vera Soudeikine, to whom he dedicated the Octet for wind instruments (1922–1923). To his wife Katarina he dedicated the Serenade in A (1925), one of many piano works written in the 1920s which also included the Capriccio for piano and orchestra (1928–1929) and the Sonata (1924).

In 1927 Stravinsky celebrated the 20th anniversary, of Diaghilev's first Paris season with the opera-oratorio Oedipus rex, based on a Latin version of the tragic myth by the poet Jean Cocteau. Neither Diaghilev nor the audience really appreciated this strange hybrid, which is now recognized as a masterpiece. Stravinsky had already begun to cut loose from Diaghilev. His next ballet score, Apollon musagére (a title later abbreviated to Apollo), was written to a commission from the American patroness Elizabeth Sprague Coolidge, and was the first of Stravinsky's ballets to be choreographed by George Balanehine (1904–1983). It was followed by Le baiser de la fée (The Fairy's Kiss), a Tchaikovskian pastiche, for Ida Rubinstein's rival troupe. Diaghilev had little time to complain: he died in Venice in August 1929. The following year, Stravinsky was commissioned by Serge Koussevitzsky (1876–1951) to celebrate the 50th anniversary of the Boston Symphony Orchestra with the Symphony of Psalms; and in 1931 he began an association with the violinist Samuel Dushkin, for whom he wrote the Violin Concerto and the Duo Concertante for violin and piano.

In 1934 Stravinsky became a naturalized French citizen. The same year he collaborated with Andre Gide (1869–1951) on the musical melodrama Persephone, again for Rubinstein, which was coolly received. But by the mid 1930s his main commissions were coming from the other side of the Atlantic. They included the ballet Jeu de cartes (The Card Game, choreographed by Balanchine in 1937 for the American Ballet), the pseudo-Baroque chamber concerto Dumbarton Oaks, and the Symphony in C for the Chicago Symphony Orchestra (1940).

The imminent outbreak of World War II, combined with the deaths of his elder daughter, his wife, and his mother, drove Stravinsky to seek sanctuary in the USA. On 9 March 1940 he married Vera Soudeikine, then settled in Hollywood and applied for US citizenship:The early works of his American years include the Symphony in Three Movements, the Circus Polka (1942) for dancing elephants in the Barnum and Bailey Circus, Scènes de ballet (1944) for a Broadway revue, the Danses concertantes (1941–1942), and the Ebony Concerto for the jazz clarinettist Woody Herman (1913–1987). Stravinsky's last neo-classical work was the opera The Rake's 'Progress (1948–1951), inspired by William Hogarth's famous 'series of etchings, to a libretto by W H. Auden (1907–1973) and Chester Kallman (1921–1975). It was premiered in Venice in September 1951.

After The Rake's Progress Stravinsky's style underwent a major change. His meeting in 1948 with the conductor Robert Craft (born 1923), an admirer of Schoenberg, introduced Stravinsky to the music of the Second Viennese School. The first fruit of his own experiments with serial technique was the Canticum sacrum (1955), designed for performance in St Mark's, Venice. Two further stage works date from his later years: the ballet Agora (1953–1954), and the musical play The Flood (1961–1962), based on the York and Chester mystery plays and first produced on American television.

Many of Stravinsky's later works, from the 1948 Mass onwards, sprang from religious impulses. They include Threni (Lamentations of the Prophet Jeremiah) for solo voices, chorus, and orchestra (1957–1958), the cantata A Sermon, a Narrative and a Prayer (1960–1961), the "sacred ballad" Abraham and Isaac for baritone and chamber orchestra (1962–1963), Introitus for men's voices and ensemble (1965), and his last major work, the Requiem Canticles for soloists, chorus, and orchestra (1965–1966). One of his last works was the charming setting for voice and piano of Edward Lear's poem "The Owl and the Pussy-Cat" (1966).

In 1969 Stravinsky and his wife moved to New York, where he died two years later. He was buried near Diaghilev in Venice.