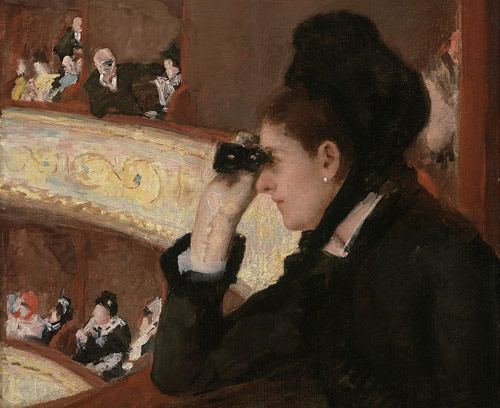 In the Loge (1879) by Mary Stevenson Cassatt shoes a woman watching a performance in Paris.

Opera (from the Latin for 'works'), in the broadest sense is a theatrical form in which music, text, and spectacle all combine in the service of an overarching drama. It is the most flexible of all musical forms and has been subject to an immense range of styles. Opera began as a recreation of ancient Greek drama. The Florentine Camerata – a group of intellectuals, musicians, and poets in Florence at the end of the 16th century – started the art form that would rapidly spread through Europe. The first known opera was Dafne (1598) by Jacopo Peri (1561–1633), set to a libretto based on Ovid's Metamorphoses. The remaining fragments of this work for a small ensemble reveal the art form as we know it today: arias sung by soloists, choruses, and sections of narrative consisting of sung recitatives. The first major opera that still remains in the repertoire is Claudio Monteverdi's L'Orefo (1607).

Composers throughout the centuries have found ways to adapt the genre to contemporary musical styles and topics. Operas never game up mythical and allegorical topics – adaptations of Shakespeare's dramas by Henry Purcell and others. Nordic myths in Wagner's Ring Cycle, or cosmic allegories in Stockhausen's seven-opera cycle Licht –but realism never made strong gains. Even a work such as John Adam's Nixon in China can be seen in allegorical terms, illustrating how myths can be created in contemporary events.

Traditional opera was aimed at the upper classes and courts, but popular forms developed (operetta in the 19th century and musicals in the 20th) and these have held solid cultural positions. Like opera, operettas and musicals have dealt with myths such as Orpheus in the Underworld, fiction such as Victor Hugo's Les Misérables (1862), and contemporary topics, such as AIDS (Rent, 1994), the Cold War (Chess, 1984), and the sexual revolution (Hair, 1967).

opera in the nineteenth and twentieth centuries