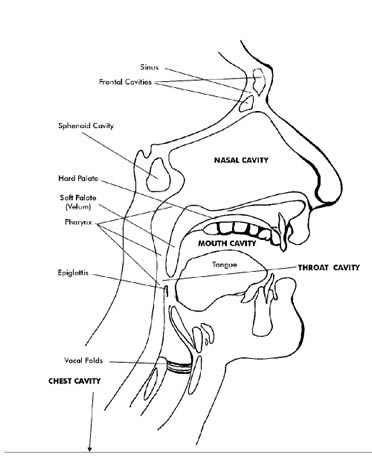 The first thing to be clear about the term 'head voice', or head register, is that there's no precise agreement about what it means – there are no hard and fast definitions, even among experienced and distinguished voice teachers. Both males and females can be thought of having a chest voice, a middle voice, a head voice, and a falsetto. Not everyone would agree that males have a middle voice and that females have a falsetto, but the weight of opinion is that they do. In any case, in both males and females, head voice is basically an upper region of the voice in which most of the resonance is produced in the upper part of the vocal tract, including the nasal cavity.

It's important not to lose sight of the fact that the ultimate source of the voice is air from the lungs passing over the vocal folds and causing them to vibrate. By themselves, the vocal folds hardly make any sound at all. It's the way these vibrations are transmitted to other parts of the upper body and head that produce the much bigger sound that is heard externally (just as the body of an acoustic guitar picks up the hard-to hear vibrations of the strings and makes them clearly audible).

It's also important to remember that in singing what matters is the quality of the final product rather than the scientific or anatomical means by which the sound is produced. Nevertheless, we need to have some way of referring to the different regions of a person's complete vocal range. All singer's recognize is that there is a note or a small range of notes where they experience a break in their voice – a fairly precise point at which they need to make a transition from one register, or method of producing the sound, to another. Singers often refer to a difficult or problem note, or small range of notes, where their voice teeters between the two registers, although the exact location of the break may depend on the circumstances of the song where it occurs, such as the vowel sound or the dynamics of the performance.

Male and female voices differ, and not only in the fact the female range is, on average, shifted up by about an octave from that of the male. It is sometimes said that falsetto is more a characteristic of the male voice and that middle voice is more clearly evident in the female voice. What is less controversial is that both males and females have a chest voice and head voice.

A simple way of thinking of the distinction between these two voices is that in chest voice almost all the resonance is produced in the lower part of the vocal tract, including the pharynx, but not (despite the name) the chest, whereas in head voice most of the resonance comes from the air spaces of the upper vocal tract, including the nasal cavity and the frontal sinus cavities.

In head voice both the cricothyroid (CT) and thyroarytenoid (TA) muscles are contracted, but the CT muscle predominates, and so the range of pitch for head voice is higher, since the folds are lengthened, thinned, and stretched. A smaller portion of the folds is in vibration in head voice; only the outer layers of the cover vibrate. The fundamental frequency and all overtones are weaker than in chest voice, and the folds are open for a larger portion (more than half) of each vibrational cycle than in chest voice.

Head voice generally sounds lighter in timbre than chest voice and has a brighter, more ringing tone to it. It is not, however, necessarily less powerful. Sopranos, for example, sing with great strength in their head voice. From the singer's point of view, there is the feeling of the center of the voice rising like an elevator up the pharynx (throat) higher and higher into the head as he or she moves toward the upper end of their vocal range.