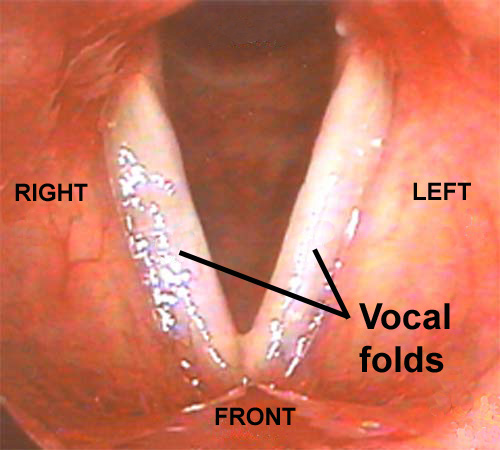 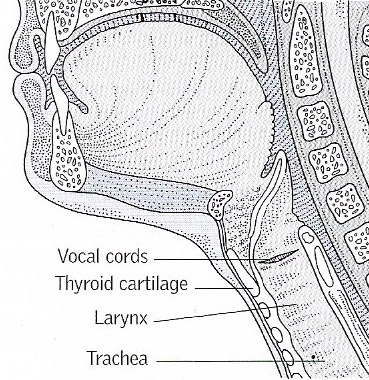 The vocal folds, also known as vocal cords, are a pair of small elastic structures which project horizontally into the larynx (voice box) from the side walls. They meet at the front, where they are connected to the thyroid cartilage, and, when relaxed, open out toward the back to form a 'V' shape. At the back of the larynx they are connected to the cricoid cartilage via the arytenoid cartilages, which are in turn connected to a number of small muscles which control the position of the arytenoids and hence the position and tension of the vocal cords. The opening between the cords is called the chink of the glottis. When we speak or sing the vocal folds come together and the opening more or less disappears. Air passing between the closed folds causes them to vibrate. The vibrations of the folds, when amplified and modified in other parts of the throat, head, and chest, give rise to the voice.


The vocal folds and singing

When a low note is being sung, the vocal folds are drawn together loosely along their entire length and the whole mass of them vibrates, so that the sound produced is rich and deep. As higher notes are sung the tension of the folds increases, so that they become more and more taught and only the inside edges of the folds are vibrating. As the pitch of the note increases still further, the cords begun to pull apart at the rear, like a zipper that is being unzipped. The pitch increases as the tension in the folds rises and the voice lightens, or thins out, as the mass of the folds that are vibrating gets less.

A person's natural or normal speaking voice pitch is determined by the resonant frequency of the vocal folds. In an adult male this frequency averages about 125 Hz, in an adult female around 210 Hz, and in a young child over 300 Hz. For comparison, middle C on a piano has a frequency of about 262 Hz.