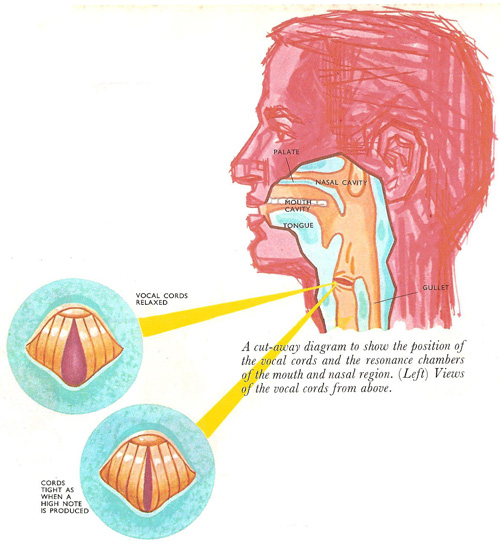 The vocal folds, shown when relaxed and tight, and their location in the throat.

Many different animals, including mammals and birds, can produce sounds but only humans are capable of real speech. Only humans have sufficient control over their voice to produce the wide range of sounds necessary for speech. Each sound or collection of sounds (word) is used as a symbol. Languages developed as people evolved enough symbols to be able to put over more and more complicated ideas to other individuals.


The voice and vocal folds

The voice is produced in the larynx, or voice-box, which is a special part of the wind-pipe in the throat. Around the larynx are various cartilages; the larger one at the front (thyroid cartilage) forms the Adam's Apple. Inside the voice box are two sheets of tissue called the vocal folds (vocal cords). These are responsible for the actual sound production.

During normal breathing the vocal folds are relaxed and there is a triangular opening between them. During speech the folds are tightened by their muscles and, as air is forced up from the lungs, the folds vibrate. The opening between the folds opens and closes rapidly and sets the air vibrating with the fundamental frequency corresponding to the rate of vibration of the folds. This fundamental frequency determines the pitch of the note. There are also many overtones or harmonics produced. These are of less intensity then the fundamental note but of higher pitch. They give the note quality. A pure note, without overtones, sounds tinny.

Notes of different fundamental pitch are produced by changing the position and tension of the vocal folds. The volume of sound is controlled by the pressure of the air pushed trough the voice box by the lungs.

All mammals have this basic arrangement for making sounds although the size of the folds varies a great deal. The sound is produced in the voice box but its quality is determined by the mouth and nasal region of the breathing tract. These regions are cavities in which some of the overtones are lost, while others are emphasized. Humans have fine control over their facial muscles and, just by changing the shape of the mouth, they can produce a very different sound. This is called articulation. The sound 'oo' is altered to 'ee' simply by altering the shape of the mouth. The vocal folds are still vibrating at the same frequency but a different set of overtones is being emphasized and the quality is therefore changed. Other animals have not this fine control and their voices lack the variety of sounds. Parrots and some other birds can imitate human sounds, but this is not true articulation.

Vowels and consonants are the main speech sounds. Vowel sounds – whether they be pure or mixed – are produced with an open vocal tract and can be maintained. Consonants are incorruptions of the air flow produced by closing the tract at the lips (e.g., the sound "cob"), at the teeth ("cod"), or at the back of the mouth ("cog"). These are stop consonants. If the tract is not completely closed, frictave consonants are produced such as the sounds 'v' and 'z' and the 'th' (as in 'this'). The examples above are voiced consonants involving vibration of the vocal folds. Many others, both stop and fricative forms, are unvoiced. They are produced by air-movement in the mouth only. Examples are cap, cat, cash, and thick. Some sounds, such as 'm', 'n' and 'l', can be maintained and these are called semi-vowels.