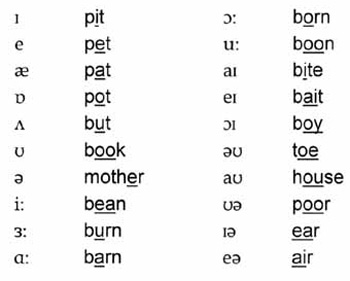 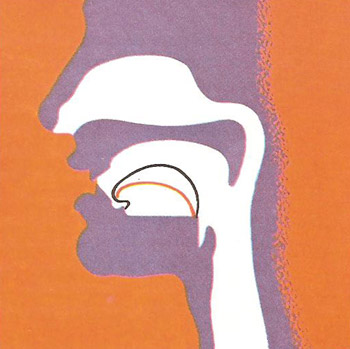 The tongue position varies with the vowels; the higher position is for 'mean', the lower for 'man'.

A vowel is a speech element that is produced by the breath passing through the mouth with little or no restriction. The mouth, acting as a resonance chamber, changes shape to form different vowel sounds, assisted by the tongue. The English alphabet has five vowels (a, e, i, o, u, with, sometimes, y) but these, often compounded, may be used to represented many different vowel sounds, some of which are listed in the top illustration.

Corner vowels are the three vowels, "ay," "ee," and "oo" that are formed by extreme placements of the tongue.

To a large extent, singing involves extended vocalization of vowels at specific pitches and amplitudes.

The vast majority of singing happens on vowels so that an understanding of how they are sung is vital. The various vowel sounds set up different resonances in the head and upper body. For example, the vowel sounds 'ah', 'awe', and 'oh', which are considered open sounds, tend to resonate more in the chest region and at the back of the throat, whereas the forward-placed vowels 'oo' and 'ee' are more resonant in the head and around the front of the face. However, a singer can, by thinking or directing a sound into different resonant cavities, alter the sound of a vowel, to produce brighter, lighter, darker, or more focused sound.