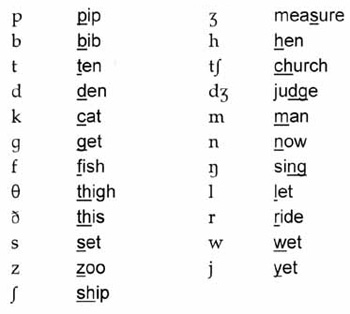 A consonant is a speech sound such as B, F, T, or M that is articulated with complete or partial closure of the upper vocal tract, which in turn partially or completely interrupts the airflow.

Consonants can be described and distinguished from each other by whether they are voiced or not, where they are placed, and how they're articulated.

Some consonants are "voiced", in other words involve vibration of the vocal folds, while others aren't. For example, both "p" and "b" are made by closing the lips briefly to stop the flow of air and then releasing it. But of the two only "b" is voiced.

This has to do with where in the vocal tract – extending from the lips to the glottis – the air flow is obstructed. The key regions of articulation used to contrast phonemes in English are, from to back and then down the vocal tract are:

This has to do with how much the air flow is obstructed in forming the sound. Consonants can involve anything from a complete obstruction of the airflow, as in "p" or "k", to a very slight obstruction as in "w" or "j". The main forms of articulation in sounding phonemes in English, starting with those involving the most obstruction, are: