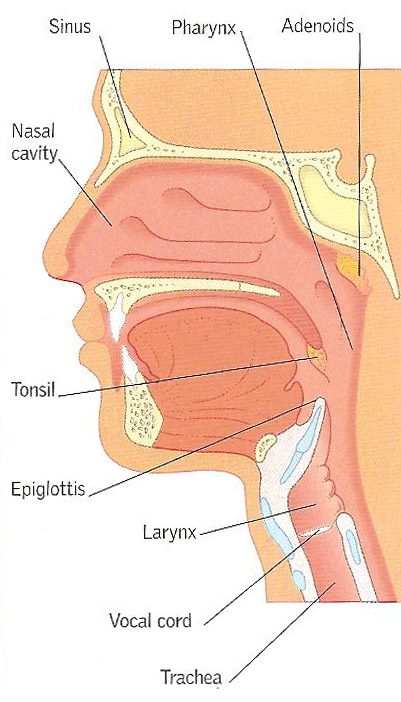 The larynx, sometimes called the voice box, is the main voice-producing organ of the body. Located in the neck, it is composed largely of hard cartilage, which safely houses the vocal folds (also known as the vocal cords). It lies between the pharynx (throat) and the trachea (windpipe).

The major function of the larynx is to keep the airway open from the lungs to the nose and mouth, which means keeping the space between the vocal folds – the rima glottidis – open. Vocalization is the second important function and is a very complicated process that requires a variety of parts of the body, including a collection of small muscles in the larynx, to work together.


Structure and components of the larynx

Within the larynx, stretching between the thyroid and arytenoid cartilages, are the vocal folds. The folds vibrate to produce vocal sounds when air from the lungs passes through them. These vibrations are modified by the tongue, mouth, and lips to produce speech and song.

Attached to the top of the thyroid cartilage is the epiglottis, which is a leaf-shaped flap of cartilage that closes over the larynx to prevent food and liquid from passing into the trachea during swallowing.

In vocalization, several small cartilages and muscles within the larynx work together in close cooperation. An important part of the training of a singer is to learn how to control these components to produce accurate, desirable tones without straining other muscles that aren't part of the vocal apparatus.

The term 'forced larynx' is sometimes used to describe a condition in which the extrinsic laryngeal muscles used for swallowing and chewing pull the larynx up or down when creating tone in an attempt to tighten (stretch) the vocal folds by force. This results in the condition referred to as high larynx, which is associated with a strained, strangled sound as the airway is partially closed off. Needless to say, this is an incorrect method of vocal production, although one often used by inexperienced singers.