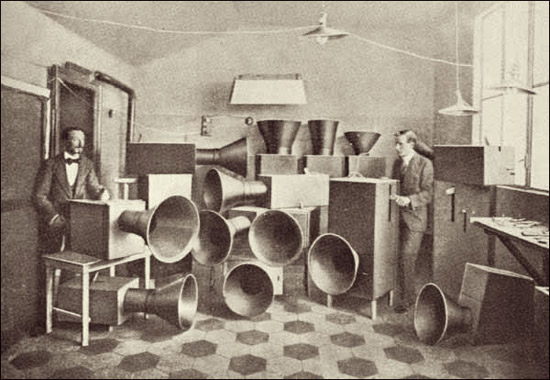 Russolo with his intonarumori.

The intonarumori, a series of instruments invented by Italian futurist, artist, and musician Luigi Russolo (1885–1947) between 1913 and 1921, created sounds in a similar way to a hurdy-gurdy. Each one comprised a single string inside a box, made to vibrate by a wheel that rubbed against it. The machine had a mechanism to change the tension and pitch of the string, and a diffuser horn to amplify the sound. Using a variety materials for the different components of the intonarumori created different acoustic effects – as illustrated in their descriptive names, including the scoppiatore (exploder), sibilatore (hisser), and ululatore (howler).

Russolo wanted to make it possible for composers to capture the "infinite variety of noise sounds" in music as he explained in his manifesto The art of Noise (1913). Russolo and his brother Antonio composed music for the new instruments, including incidental music for futurist films. The instruments were revolutionary in the way they incorporated noise and environmental sound into modern music. His work was a direct influence on the first generation of composers to work with electroacoustics, including Varèse, Cage, and Pierre Schaefer (1910–1995), the inventor of musique concrète and the first composer to work with magnetic tape. In 1922, Russolo invented a rumorarmonio – a keyboard mechanism that enabled one performer to play several intonarumori. Unfortunately, all Russolo's instruments and scores were lost during World War II, and there is only one primitive recording of the intonarumori available today.