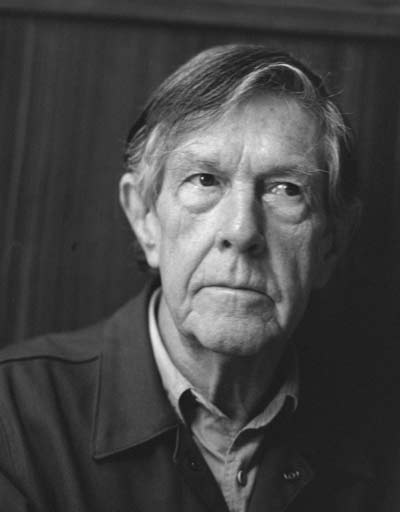 The American composer John Cage was one of the most interesting experimental artists of his time. He studied with Henry Cowell (1897–1965), himself a noted pioneer of innovative techniques) and with Schoenberg, who called him "an inventor – of genius". From 1937 onwards he developed a strong interest in dance and percussion techniques, and in 1942 he moved from the West Coast to NewYork, where he began a long association with Merce Cunningham's dance company.

In 1938 he invented the "prepared piano" by inserting small domestic objects, such as paperclips and rubber bands, between the strings. This instrument, capable of producing extraordinary timbres, was used in Cage's early pieces such as Sonatas and Interludes (1946–1948), and Music for Marcel Duchamp (1947). The Wonderful Widow of Eighteen Springs (1942) is a setting of a poem by James Joyce for voice and closed piano. A devotee of Zen Buddhism (before it became fashionable) and the I-Ching, Cage introduced aleatory (chance) techniques into his music, for instance in Music of Changes for piano (1951), in which the performance depends on the toss of a coin, and Cheap Imitation (1969), an alteration of Satie's Socrate, worked out using the I-Ching. With these works, he changed the nature of music by removing the necessity of intention from composition.

In 1952, with Imaginary Landscape V, Cage began to use electronic tape in his works. In the same year he "wrote" his notorious 4' 33", in which the performer sits at a silent piano and is required only to indicate the division of the work into three movements: the attention of the audience is directed to life (including the chance sounds of the environment) rather than art. Also from 1952 dates Theater Piece for Merce Cunningham, the first "musical happening", combining theater, art, and music. From then on Cage used a wide range of electronic media in his works, which are often scored for bizarre combinations. For example, Imaginary Landscape IV (1951) is for 12 radios and 24 players, Speech (1955) for five radios and newsreader, HPSCHD (1967–1969) for seven harpsichord soloists and 51 tape machines, and Postcard from Heaven (1983) for between one and 20 harpsichords.

Cage was a musical philosopher. He believed that art was whatever the artist said it was: "I have nothing to say, I am saying it, and that is poetry." An avowed anarchist, he followed a strict macrobiotic diet, was a brilliant chess player, and was an expert on mushrooms.