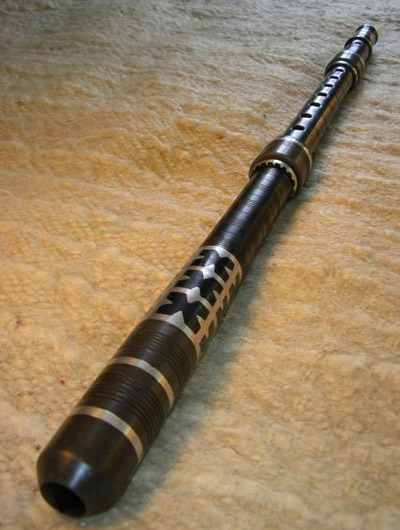 Found in the Balkans, the kaval is an end-blown flute played using effectively the same technique as the non-Iranian ney, but made of turned wood rather than cane or bamboo. Bulgaria in particular is home to some brilliant kaval players, and their instrument is made in three pieces, usually with the rim made of some more robust material than wood, such as horn or fiberglass, and decorated reinforcing ferrules at the joints. Macedonian kavals are very thin-walled, turned from a single piece of wood (usually ash), and typically kept in matched pairs on sticks inserted up the bores to prevent bending and damage.

The norm for a Macedonian or Bulgarian kaval is seven finger holes on the front and one on the back, all the same size and equally spaced. This might suggest a scale far from equal temperament or even just intonation, but in fact these instruments are capable of chromaticism in their middle and high range, and cover a wide compass of three octaves – with a soaring high end and a multiphonic ability that gives a fine split-tone breathiness to the low notes.