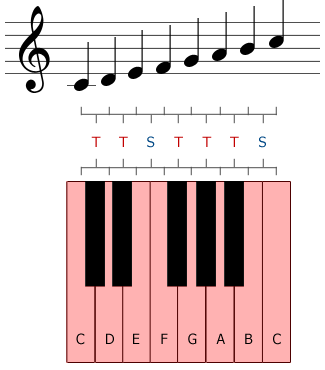 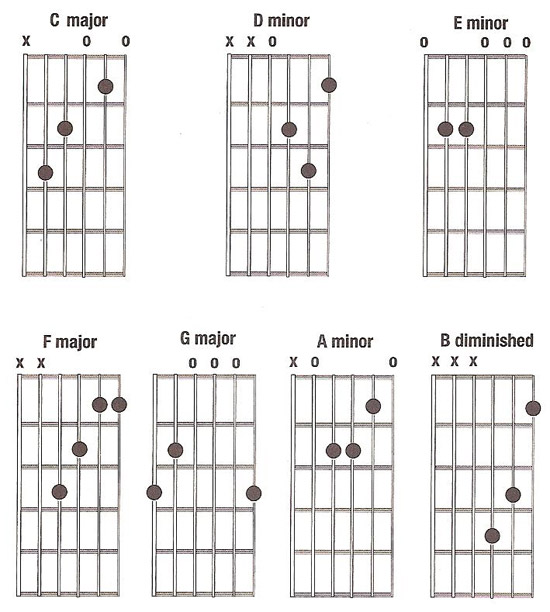 A major scale is a diatonic scale having semitones between the third and fourth and the seventh and eighth notes. Every major scale is made up of two halves. For example, in the case of the scale of C major these halves contain the notes C, D, E, and F, and G, A, B, and C. Each half is called a tetrachord and has an interval pattern of tone, tone, semitone. An interval of a tone separates the two tetrachords (F to G).

The order of sharps that emerges is: F♯, C♯, G♯, D♯, A♯, E♯, B♯. In order of increasing number of sharps, the major scales with sharps are:

Just as key signatures with sharps had a pattern, so do those with flats. The difference is that each new flat added is a fourth away from the previous one: B♭, E♭, A♭, D♭, G♭, C♭ F♭.

A clear way to understand these relationships is using the circle of fifths.

In solfege, the notes of the major scale are named as follows: Do, Re, Mi, Fa, Sol, La, Ti


Harmonized chords of the major scale

Starting from each note of a major scale, it's possible to construct a harmonized chord by taking the note itself (the root) and adding the third and fifth above it. In the case of C major, we end up with the following series of triads: C major, D minor, E minor, F major, G major, A minor, and B diminished. The diagram to the right shows how these these chords are played on a guitar in open position.