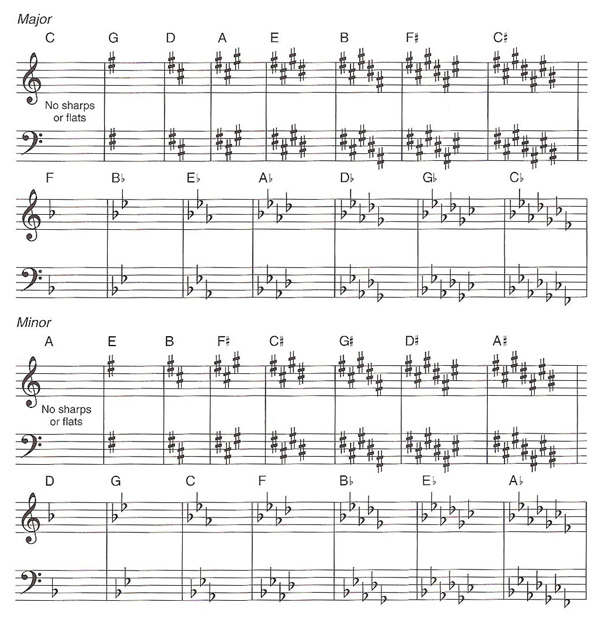 The key of C major is the simplest because it contains no sharps or flats at all (see major scale). The next simplest are G major (one sharp) and F major (one flat). Starting from C major we can generate all the other major scales. Take the fifth note (the dominant) of C major, G. and make it the first note of the new scale, G major. In order to maintain the standard step-pattern of the major scale, the 7th ("leading") note of the new scale must be raised by a semitone. This note is F – the fourth (subdominant) note in the scale of C major – and it must be raised to F#. The rule is therefore this: the 5th note of any scale can be used to start a new scale in which only one note need be raised, this being the 4th note of the old scale, which becomes the 7th note of the new scale.

Now consider the keys that have flats in their key signature. To get the scale of F major starting from C major, start the new scale from the 4th (sub-dominant) note of C major (F). This time to maintain the major scale pattern of tones and semitones, the 7th note (B) has to be flattened, thus becoming B♭. Continuing on, take the 4th note of F major, B, and make this the first note of the next scale (B major) and flatten the 7th (E), becoming E♭, and so forth.

That is, the one order is the other reversed.