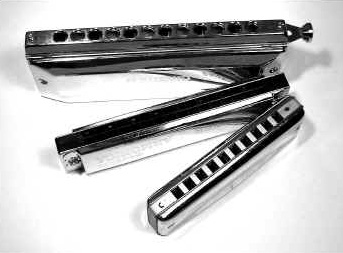 A mouth organ, also referred to as a harmonica, is generally rectangular in shape, with the body of the instrument containing metal reeds which run the width of the instrument. Each reed-pair is separated into individual air passages to keep them distinct from one another. A series of equally spaced, small holes run along the length, or side, of the instrument. The player can exhale or inhale through these chambers eliciting two notes. The reeds are situated so that one responds to inhalation and the other to exhalation, or, more simply, to sucking and blowing. This gives the player the ability to play both melodies and harmonies. Larry Adler was considered the best harmonica player ever.

The chromatic harmonica (there are many refinements and variations of both diatonic and chromatic harmonicas) has a hand-operated slider that opens and closes holes to direct breath to one of two reed-banks tuned a half-step apart. On tremolo harmonicas, pairs of reeds are slightly detuned to give a beating effect. Sophisticated playing techniques have developed, including bending notes (a style evolved by blues players) and manufacturers, early on in Germany and other parts of Western Europe, but now also back in the birthplace of the freed reed, East Asia. A specific type of harmonica, known as the blues harp was developed specifically to play this type of music.