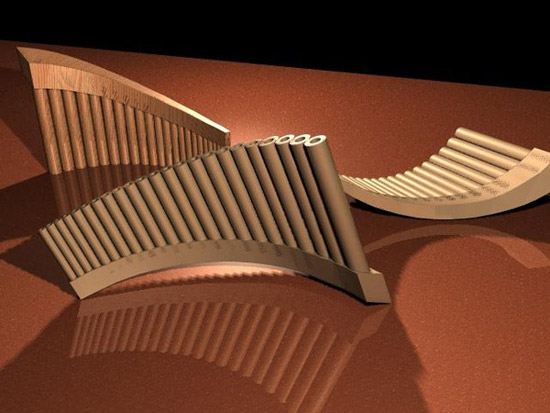 Panpipes are a type of end-blown flute, also known as pandean pipes or syrinx, consisting of a series of wooden whistles, graded in size to give the pitches of different notes, and bound together. The sound is made by blowing across the top of the pipes. It is of great antiquity and widespread use.

In Europe, the most famous and highly skilled players come from Romania, where the instrument is called a nai or by its Greek name syrinx. Here it usually takes the form of a curved row of tubes set into a wooden frame. In another center of excellence, the Andean countries of South America (where it is known by the Spanish names zampoña or rondador), the tubes range up to a meter or more in length, and may be in double or triple rows. To play the largest versions, these rows are separated and a pair of players takes one each.

The Lithuanian skuduciai and Filipino saggeypoe are sets of panpipes played by a group, each player with just one or two tubes, while each player of the Russian kugikly or kuvikly has up to five.