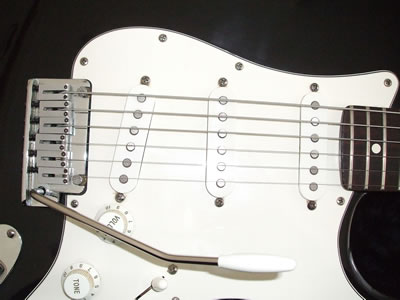 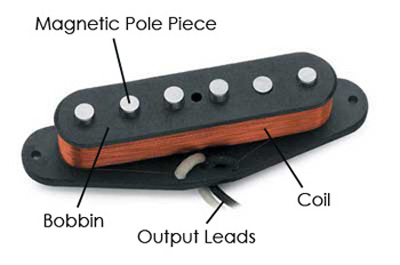 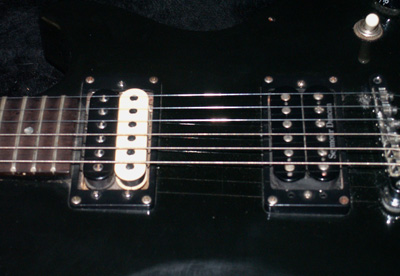 A pickup is an electromagnetic device that converts the energy produced by a vibrating guitar string into AC (alternating current) pulses which are fed to an amplifier. Electric guitars may have one, two, or three pickups arranged between the base of the neck and the bridge. The lead or bridge pickup gives a harsher, treble sound, the rhythm or neck pickup a more mellow tone, and the middle pickup, if present, an intermediate tone. There are two basic kinds of pickup: the single-coil, used famously on the Fender Stratocaster and Telecaster, and the humbucker, found on Gibson guitars.


How a pickup works

Michael Faraday the great scientist who carried out pioneering experiments in electromagnetism would have recognized instantly how a pickup does its job. In its simplest form – the single-coil – a pickup consists of a permanent bar magnet with a continuous length of fine insulated copper wire wrapped around it several thousand times to form a coil. The magnet creates a magnetic field around itself, and the pickup is mounted on the body of the guitar so that the strings pass through the field. Because the strings are made of steel, they interact with the field, and when struck they alter the field's shape. Some of the lines of force which make up the magnetic field intersect the coil and, when the vibrating string causes the lines of force to move, small electrical pulses are generated in the coil itself. The frequency of the pulses and their amplitude are determined by the frequency and amplitude of vibration of the strings. The pulses are passed along a cable to an amplifier and turned into a signal strong enough to drive a loudspeaker.

The single-coil pickup is particularly susceptible to stray 50 or 60Hz fields radiated by AC mains equipment such as amplifiers. This unwanted noise manifests itself as an annoying hum. It was to address this weakness of the single-coil that, in 1955, Gibson engineer Seth Lover devised the humbucking pickup. This uses two coils, instead of one, wired in series but out of phase with each other. This means that any interference is sent by one coil as a positive signal and by the other as a negative signal. The two opposite currents, flowing in opposite directions, therefore cancel each other out, and the hum is not passed on to the amplifier.

To ensure that the two coils don't cancel out the currents generated by the vibrating strings as well, the sets of pole-pieces within each coil have opposite magnetic polarities. The result is that when the secondary coil inverts the signal from the disturbed magnetic field it duplicates, instead of canceling, the electrical pulse.


The Stratocaster and Gibson pickups compared

The single-coil pickups used with Fender Strats and Telecasters deliver a clear, glassy tone with a penetrating treble. Instead of using a single bar magnet, Leo Fender employed six individual magnetic-pole pieces, each staggered slightly in height to help equalize the volume of the six strings. The coil is wrapped around the pole pieces. Originally, it was made with 8,350 turns of copper wire, although modern Strat pickups use only 7,600 turns.

The humbucker which, since the mid-1950s, has been fitted to most Gibson electric guitars, also has a distinctive sound. It has less overall sound definition and a decreased response to higher frequencies than the Fender single-coil pickup but gives a "fatter" sound.