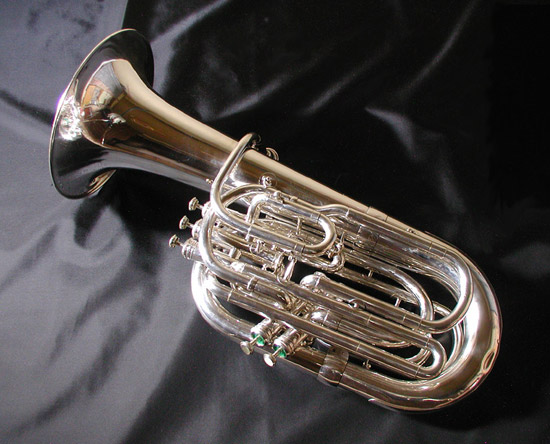 The saxhorns are a family of seven brass instruments based on the inventions of Adolphe Sax in the 1840s. They are keyed alternately in E♭ and B♭ in the same way as saxophones.

Sax's instruments were made of brass, with conical bores finished off by a flared bell; the tubing sections directly linked to the valves were cylindrically bore. In general the main tubing section looks like large trumpets except that the bell always points upwards. Like all brass instruments, the mouthpiece is cup-shaped and sound is created from the player buzzing his lips together.

The E♭ soprano is today seen as the E♭ cornet, the B♭ contralto has disappeared, the E♭ alto is better known today as the tenor horn, the E♭ baritone is the modern baritone, the B♭ bass is the euphonium, and below that are the E♭ and B♭ contrebasse saxhorns.


History of the saxhorn

The early part of the nineteenth century was a rich period for the development of instruments; many designs dating from this period are now established as the standard forms. The brass world was no exception.

Adolphe Sax, a man with business acumen and a fascination with design, was quick to seize on these developments. Having found major success with his patented saxophone family in the 1840s, he moved from Brussels to Paris, where he rapidly established himself as an instrument-maker to be reckoned with.

His next move was to create a family of brass instruments based around the valve system, and in 1845 he applied for a patent for his new designs. Ever keen to seize an opportunity, Sax saw his instruments as a means of reinvigorating the wilting tradition of French military music. He organized a public contest between an established military band and a group of his new instruments in the presence of the Minister of War, as a result of which the saxhorns were officially adopted.

This was not quite the coup Sax had hoped for, however, since a number of well-established manufacturers contested his claim to originality. Their concerns were well founded since the essential components of the saxhorn – the mouthpiece, bore, and valve system – were already in use elsewhere. Sax played another trump card in persuading the Distin family quintet, the leading British brass quintet of the time, to adopt his instruments. The backing of the Distin family inevitably led to the saxhorn taking off in Britain; in 1853, the first major brass-band competition was won by a group all playing saxhorns.

There is considerable confusion about the term 'saxhorn'. Adoplhe Sax himself used it only once and it is claimed that Henry Distin was the term's source. Distin also contributed to the confusion, since he held the franchise for Sax's instruments for the 1840s until the late 1850s. When he lost the franchise, however, he continued to sell instruments that bore a strong resemblance to Sax's, but were referred to 'flugel horns', 'euphonions', and 'tubas'.