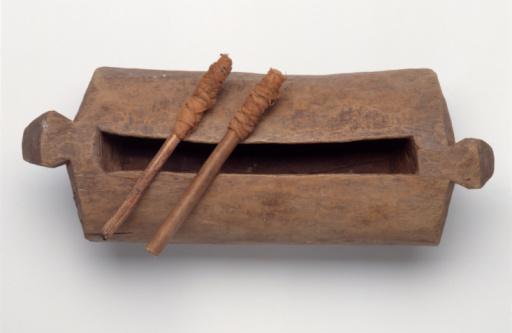 A slit drum is a hollow percussion instrument which, despite its name, is not a true drum (because it lacks a membrane) but a kind of idiophone. Slit drums are found in many pre-industrialized cultures in Africa, Australasia, Central and South America, and the Far East. They are formed by hollowing a block of wood through a lengthwise slit, and are sounded by the players' stamping feet or by being beaten with sticks. The slit may be shaped to leave two or more tongues of wood of different lengths and thicknesses, which play different tones when struck.

In central Africa, large slit drums are made from hollowed logs used by chiefs or prominent nobles to transmit messages over long distances. Drums for sending messages may also be suspended from a frame to maximize their resonance and carrying power.

Slit drums are often sited outside temples in the Far East and used to call the faithful to prayer. The temple block is a smaller slit drum, widely used in China, Japan, and Korea. It was originally played to accompany Buddhist chants, but is now also used in folk instrumental ensembles. Temple blocks are bulbous in shape and often appear in sets. They can range from 5–50 centimeters (2–20 inches) in width. Smaller slit drums like the woodblock are also used in western music. Modern slit drums, or gato drums, were used by the composer Karlheinz Stockhausen in his piece Gruppen, which asked for tuned log drums.