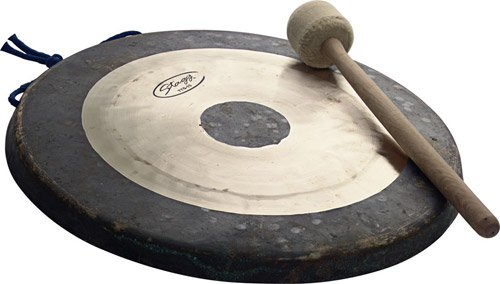 A tam tam is a large, flat, suspended bronze disk played with a beater. The tam tam, unlike the gong, is untuned. It measures 70–100 centimeters (28–40 inches) in diameter and has a narrow, turned-back rim.

The tam tam appeared in the orchestra in the late-eighteenth century, and has often been used to create an atmosphere of terror and gloom. It is struck midway between the center and the edge. For a very loud single strike, the tam may be struck gently a few time sin order to start the instrument vibrating, and then hit loudly. Striking the tam tam repeatedly with moderate force will make the higher overtones ring with increasing intensity, and create a menacing shrieking sound.