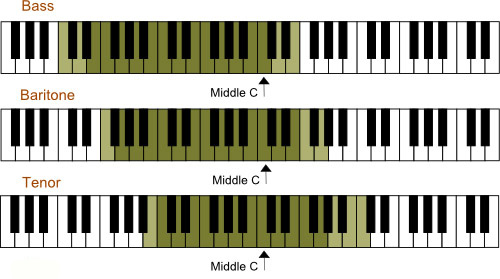 Tenor is the highest non-falsetto adult male voice type. Lower than tenor is baritone; higher is countertenor but this is largely produced in falsetto. The tenor range extends approximately from the C below middle C (C3) to the C above middle C (C4), which is also known as tenor C. Tenors, like sopranos (their female equivalent), are divided into different types: lyric, spinto, dramatic, and Heldentenor (heroic).

The term is also used to describe an instrument in the tenor range.

The tenor clef (a C clef on the fourth line of the stave) is now little used, the music being now usually written an octave above its real pitch, on the treble clef. In early church music the tenor part was the melody.