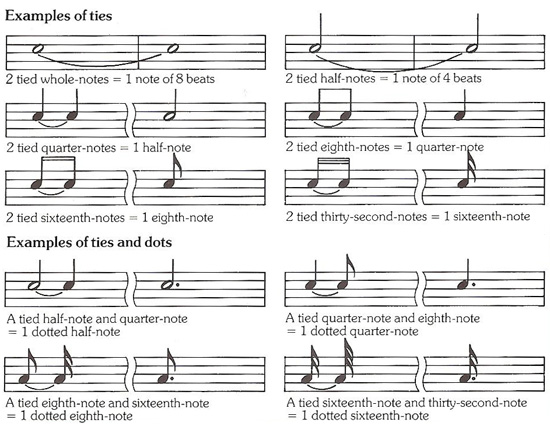 A tie, also called a bind, is a curved line placed under a note and another note of the same pitch. A tie can be used with any pair of notes, either across a bar line or within a bar, but ties are not used with rests. Ties are just one example of the used of curved lines in music.

Besides combining two note values into a longer one, ties are used to clarify a complicated phrase so that you can see how it is constructed and where the main beats fall. Tied notes can also be used as the equivalent of dotted notes (see dot).

When notes are tied, only the first one is struck. Its duration is then extended by the value of the other note(s) tied to it. Note the difference between a tie and a slur, which is used to show a smooth connection between notes different pitch.

Along with the correct use of beams, ties are also used to make beats easy to see within a measure. If eighth notes are present in a measure, imagine a line between beats 2 and 3 that notes or rests may not cross; there should be something written on beat 3 for us to read. If a sustained note from a previous beat is desired, it is tied to a note on beat 3.