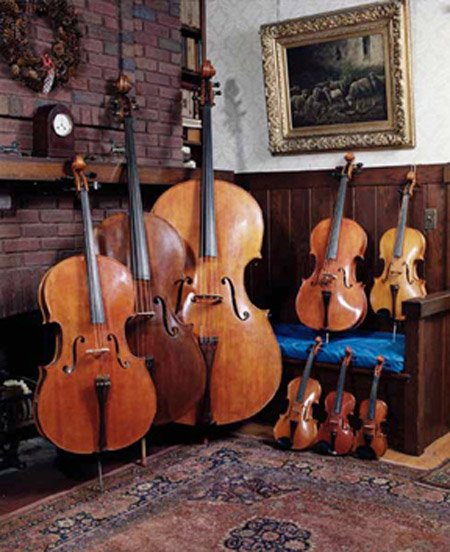 The violin family is a group of fretless bowed stringed instruments that has its roots in Italy. Four instruments make up the family: the violin, the viola, the violoncello (commonly abbreviated to cello), and the double bass.

The characteristic body shape is one of the most recognizable in music; the particular acoustic properties this shape imparts have made the violin and its siblings uniquely flexible, and they have been the most dominant instrumental family in western music for the past 400 years.


Birth of the violin family

In Europe in the fifteenth century there were two bowed stringed instruments in common use – the medieval fiddle and the rebec. The fiddle was normally a five-stringed instrument with no fixed tuning system; the rebec a three-stringed instrument tuned in perfect fifths. Both used either a flat bridge or no bridge so that the strings were generally sounded together rather than being used singly to play melody.

Although it is by no means clear that they were the inventors, two brothers, Jean and Charles Fernandes, played on three-string fiddles in the 1480s that used an arched bridge. This pushed the middle string higher than the outer ones so each string could be sounded individually.

The end of the fifteenth century saw the development of the consort principle, in which instruments of the same design but different sizes were combined to create a homogeneous ensemble. Initially this was applied to shawms, flutes, and recorders, but the first decade of the sixteenth century saw the first fiddle ensembles develop: the violin family was born.