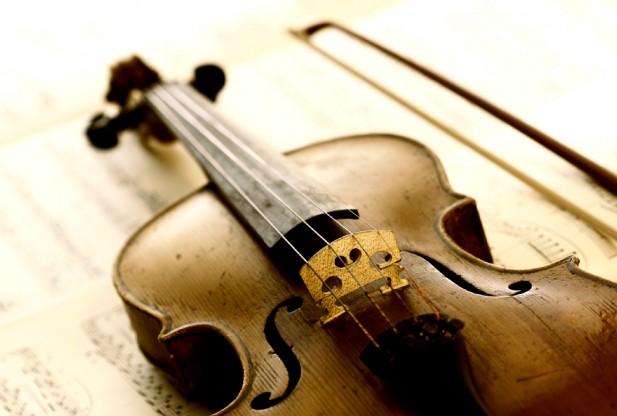 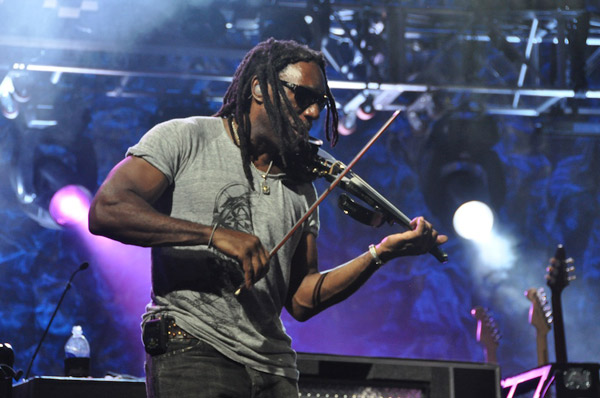 Boyd Tinsley of the Dave Matthews band on electric violin.

The violin is the smallest but most important member of the stringed instrument family played with a bow. Like other members of the violin family, it consists of a hollow, wooden body, formed of two slightly arched surfaces, known as the back and the belly, connected by sides or ribs, and with a curve or hollow on each side in the middle of the length; a neck or fingerboard attached to the body; and strings, fastened at one end to the belly by a tailpiece or projection of wood, and at the other to tuning pegs at the head or extremity of the neck, by which they can be tightened or loosened. The strings passing over the belly are raised up from it by a bridge, which is supported in the interior by the sound-post. On the belly there are two sound-holes opposite each other, of a shape resembling a long letter f.

The violin is sounded by drawing a bow across the strings, the upper surface of the bridge being convexly curved, so as to enable the bow to be drawn along each string separately, without coming into contact with the rest. (See below for more details of the construction of the strings.) The strings are tuned in fifths, the highest or first string sounding E on the fourth space of the treble clef, and the other three the A, D, and G in succession below.

The bow is made of horsehair, and the sounds of each string, other than the open notes, are made by stopping – i.e., pressing it with the finger against the fingerboard at certain distances, thus shortening the vibrating portion, and raising the pitch of the sound. Very high notes are produced by sounding the harmonics of the string, which, instead of being pressed against the fingerboard, is touched lightly, the sound resulting from the vibration being not, as in ordinary cases, of the part of the string between the point of stopping and the bridge, but of a harmonic section of it. An unusual modification of tone is produced by application of the mute, or sordino, a little instrument placed on the bridge. A violin or other bow-instrument is occasionally played pizzicato – with the fingers, as in the case of harp or guitar.

The compass or the range of the violin is about three and a half octaves, from G below the treble clef to C above the fifth leger line above it, with all the intermediate chromatic intervals; but the highest notes tend to be harsh and squeaking.

Though chiefly an instrument of melody, it is to a limited extent capable of harmony by multiple stopping – two notes may be struck together, and three or four notes may be played in arpeggio.

To begin with, the violin was less popular than its cousin the viol. Although similar techniques were used to perform on both instruments – and many professional musicians in the sixteenth century used both – their sound and characteristic repertoires were quite different. The viol was a soft but full-toned instrument, ideally suited to complex contrapuntal music; the violin, with its brighter tone and clearer attack was preferred for dance music.

As early as the mid-1500s, violins of all sizes were made, from small soprano violins through alto and tenor to bass violins. The family quickly spread throughout Europe, appearing in courts in France, England, Germany, and Poland by the middle of the 16th century. Soon the violins were used not just in dance music but also in church music, processionals, and the large antiphonal ensembles so popular during the period.

By the beginning of the seventeenth century, the violin's size and shape were well established and it had settled at four strings tuned in fifths to g-d'-a'-e". It was beginning to develop its own solo repertoire and the art of violin-making was acquiring a glamorous luster. Italy was again the focus, in particular the northern town of Cremona.

A number of great instrument makers lived and worked in Cremona during the 1600s and it was common for trade secrets to be passed down from generations. Notably successful violin makers include Andrea Amati (c .1520–c. 1578) and his sons, whose work gave Cremona its reputation, Andrea Guarneri (c. 1626–1698) and his more famous grandson Giuseppe Guarneri (1698–1744), otherwise known as 'del Gesu'), and most famous of all, Antonio Stradivari (1644–1737).

It is thought that Stradivari was at one time a pupil of Andrea Amati's grandson, Nicolo. He began producing violins in his early twenties, although he did not acquire any great reputation until the death of Nicolo Amati in 1684. During the final decade of the seventeenth century, Stradivari began to produce violins of the quality for which he is known today but it wasn't until the first two decades of the eighteenth century – often referred to as his golden period of violin making – that he reached his peak. The violins made by Stradivari in this period are still regarded as the pre-eminent examples of the craft.

Stradivari never received anything like the adulation heaped on him today while he was alive, although he was certainly regarded as a fine craftsman. Nevertheless, his particular violin design has remained almost unchanged, and is the model to which all makers aspire.

Some 70 parts make up the violin; it is one of the most acoustically complex instruments in existence. The familiar figure-of-eight body is a hollow box made from spruce and maple. Protruding from the top of the body is the neck, which is covered by an ebony, unfretted fingerboard.

The neck is topped by the scroll, so-called because it resembles a scroll of paper, which is pierced laterally by four pegs, to each of which is attached a string. These strings run down the neck – above the fingerboard – and back across the body to the tailpiece. The strings are supported by the arch-shaped bridge that sits just below the two 'f'-shaped holes, out of which much of the instrument's sound is projected.

The asymmetric bridge is specifically designed to raise the middle strings slightly to different heights above the outside strings and maintain a reasonable distance between them. This means that by angling his bow, a player is able to sound one string at a time. It is also possible for the bow to be drawn across two neighboring strings simultaneously.

The strings were originally made from sheep gut that had been cleaned, soaked in a form of bleach called lye or in red wine, twisted and finally dried. Although prone to snapping if they became too dry, gut strings were relatively durable and produced excellent tone quality.

Four aspects of a string affect its pitch: length, density, diameter, and tension. Gut is not a particularly dense material, so lower-pitched strings had to be either very long or very thick. On the instruments of the violin family, all four strings need to be of an equal length, so the only way to achieve a lower pitch was to have very thick strings. They are consequently slow to speak, since they require more energy to start vibrating and are difficult to control.

Up to this point, bass violins had been rather large – as large, in fact, as the makers thought possible without rendering them unplayable. In the mid-1600s in Bologna, however, a discovery was made that would revolutionize their construction.

Based on the work of Marin Mersenne, someone – it is not certain who – had the idea of wrapping a thin metal wire over the top of a gut of string. This significantly increased the string's density and consequently lowered its pitch. The technique of overspinning, as it became known, enabled the length of low-pitched strings to be reduced, therefore making the bass instruments far less cumbersome.

By the beginning of the eighteenth century, all the siblings of the violin family used overspun strings. Initially they were only used on the bottom string and occasionally the bottom two strings. In the twentieth century, though, it became standard to use the technique on all four strings.

The use of metal in strings, produced other benefits, including a brighter, more focused tone and better projection. There were side effects, though – the most significant of which was a hard-edged brittle quality in the sound. Other materials also developed in the 1900s that were used to make strings, most significantly synthetic materials such as nylon. The preference amongst professional players today is for strings with a gut center overspun with metal ribbon, although there has been a revival of pure gut strings among certain players.

Like the guitar with its electric counterparts, other members of the stringed-instrument family have taken advantage of the opportunities offered by electronic technology – namely amplification and access to a broader palette of synthesized (or sampled) sound.

Stringed instruments, such as the violin, viola, cello and double bass, can all be effectively amplified through the use of built-in microphones or more commonly, electronic pickups. Pickups are either magnetic – which translates the vibrations of metal strings into an electrical signal – or of the piezo-electric variety, which respond to vibration in the bridge or body of the instrument.

The amplification of sound in this way removes the need for a traditional, resonating body and many examples of electric stringed instruments – such as those produced by Zeta or Steinberger – are often of an innovative, minimalist design.

Amplified string sounds have a tendency to sound characteristically unnatural and 'electric', a fact exploited by players using external signal processors to add effects, such as delay and reverb, in the same way that an electric guitarist would.

In addition to the amplification of acoustic sound, it is possible, with the use of specialist pick-ups, to convert the vibration of strings into MIDI information. In this way string players can use their instruments to trigger the sounds found in all MIDI synthesizer and sampler sound sources.