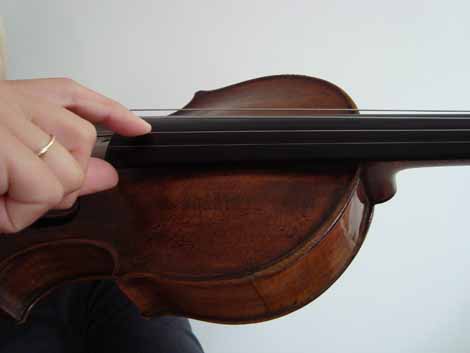 Pizzicato (from the Italian pizzicare 'to pinch') is to pluck the strings of an instrument with, typically, the index finger of the right hand; normally used in relation to bowed instruments. Fingernails can be used to release the string which is called fingernail pizzicato. It is countermanded by the direction arco.

The technique of pizzicato dates from the seventeenth century. Johann Sebastian Bach (1685–1750) made extensive use of pizzicato in his works for solo string instruments, but it was not popular in orchestral music before the Classical period. Normally, the bowing hand is used to pluck the string, but it is also possible to use the left hand, which allows for a plucked sounded to be sounded simultaneously with or in quick succession to a bowed note.

Normally, a pizzicato note is played by gently pulling the string in parallel to the fingerboard. Béla Bartók (1881–1945), however, developed a particularly forceful pizzicato, which requires the performer to pull the string vertically so that on its release it hits the fingerboard, making a slapping sound. His love of this effect ensured it acquired the name 'Bartok pizzicato'. Double-bass players in jazz often use a similar effect, sometimes called 'slap bass'.

In music notation, a composer normally indicates the performer should use pizzicato with the abbreviation pizz. A left hand pizzicato is usually indicated by writing a small cross above the note, and a Bartók pizzicato by a circle with a small vertical line through the top of it above the relevant note or by writing Bartók pizz at the start of the passage in question.