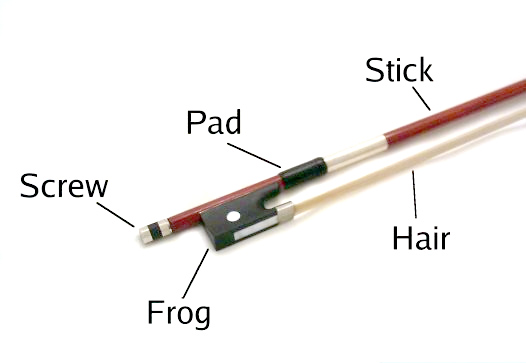 Parts of a modern violin bow.

A bow is a device, used in the string instrument family, which is composed of a flexible wooden stick with a pointed end, strung with horsehair. The bow is drawn across the strings to set them vibrating. Its quality is crucial to the sound made by the instrument and even the greatest violin or cello can only achieve its full potential if used in conjunction with a bow made by a master craftsman.

The bow must afford the player the best control possible. The player must be able to predict how the string will respond to the pressure of the bow in order to know what kind of sound will be made. The bow's weight must be light enough to allow for speed but heavy enough to play a strong legato. The tension must be high enough to allow for clear articulation, but too high a tension and the bow will break.

The quality of sound produced by a violin is strongly dependent on the materials the bow is made from. It would be simple, for instance, to create a high-tension, light bow by using carbon fiber. However, the resulting sound would be harsh and lacking in subtlety.

The earliest musical bows can be traced to the Byzantine Empire in the tenth century. They were a convex shape, much like a hunting bow, using the tendency of the wood to straighten as a means of creating tension in the hair. Experiments were carried out with different lengths of bow and different shapes of arc. Some bows were designed to allow the performer to alter the tension while playing by pulling on the bow hair.

In the mid-1700s, makers experimented with a new bow structure. Instead of a convex bow shape, craftsmen cut the wood to curve in towards the hair, allowing for higher tension. There remained, though, a kaleidoscopic range of bows, each with its own peculiar characteristics.

This disparate world of bows came suddenly into focus when, in 1785, Francois Tourte (1747–1835) created a revolutionary new bow design. His work, which combined the best of numerous recent developments, was so good that virtually every other design quickly became obsolete.

Tourte used not a tropical hardwood – as had been typical up to that time – but pernambuco, or Brazilwood, a dense orange-red heartwood. By heating the straight stick and bending it while still hot, he was able to achieve a curve in toward the hair. This meant that instead of the wood pulling the hair taught, the hair itself could pull on the wood.

He discovered that the ideal bow design was not one of uniform thickness, but one that tapered and was a specific length. The result was a light bow with sufficient tension to allow controlled bounce, good legato and power. His design meant that more pronounced sonic effects could be achieved by playing with different parts of the bow.

Tourte's design was slightly refined by subsequent bowmakers, but the essential features of his bow have remained. The whole violin family uses this bow design, although the double bass has an alternative that uses a different grip.

The downward force used by the player also affects the sound. Pushing very hard on to the string will result in a gritty, unpleasant sound. In contrast, if very little pressure is applied, then a thin, intermittent sound is heard.