We Are Not Alone

Why We Have Already Found Extraterrestrial Life

In this first of three books that I’ve coauthored with astrobiologist Dirk Schulze-Makuch, we build a strong case for the existence of life on other worlds in the solar system and beyond. Taking weird organisms on Earth as our starting point, including ice-loving bugs and microbes living in boiling hot acid, we explore what forms life might take and where it is likely to reside. From the noxious clouds of Venus to the methane rains of Titan, We Are Not Alone considers the biological credentials of alien worlds within range of our spacecraft, and the possibilities for detecting life on exoplanets.

"Packed with facts and written in an absorbing style, this book leaves you in no doubt that extraterrestrial microbes could yet be found in our Solar System." - BBC Sky at Night

What happens when we die? Does everything we are just stop? Is consciousness lost forever? Or does some vital spark inside us – a spirit or a soul – live on? In my search for the answers, I draw on recent work in neurology, psychology, anthropology, cosmology, and quantum physics. This is the third book in a quartet of early works that deal with the biggest issues in science and philosophy, including the origin of the universe, the nature of consciousness, and the relationship between matter, meaning and mind. It was preceded by Deep Time and Equations of Eternity and followed by Zen Physics.

“A watershed volume, offering for the first time a compelling, convincing argument from science for the survival of consciousness beyond death. A must read for anyone who thinks deeply about the Ultimate Question.” – Tom Harpur, author of Life After Death

In this book, I weave together the threads that connect mind, mathematics, matter, and meaning to yield a picture of the universe in which each of these components plays a vital and indispensable role. As I point out in the Introduction: “The fact that we can analyze and understand the universe is remarkable. The physicist Eugene Wigner has commented on ‘the unreasonable effectiveness of mathematics’ in describing the physical world. And it is true that through the precise symbolic language of mathematics we can probe nature’s innermost workings. Most amazingly, we can contrive whole areas of mathematics only to find that these abstract, almost playful, inventions of our mind describe to the last detail some aspect of physical behavior. That is as incredible as painting someone you have never seen and having that person arrive the next day on your doorstep.”

“Mr. Darling provides one of the clearest and most eloquent expositions of the quantum conundrum and its philosophical and metaphysical implications that I have read recently.” – New York Times

In this book, which combines hard science with elements of science fiction, I follow the exploits of a single subatomic particle as it emerges from the first instants of the universe, and then travels across the voids of time and space. It witnesses the birth of galaxies and stars before arriving on Earth and becoming part of a gold atom, which is later mined and made into part of the Voyager 2 spacecraft. We watch as Voyager is launched on a tour of the planets and out beyond into interstellar space. From its new vantage point, the particle witnesses the universe as it grows into maturity, ages, and, perhaps, dies. The presence of intelligence might, however, play a hand in cosmic evolution…

“A speculative and provocative book that extends what is known into what is unknown. It is not just another book on cosmology …. The emphasis here is on wonder.” – Los Angeles Times

“David Darling’s Deep Time is a wonderful book, the perfect overview of the universe for any citizen who doesn’t need all the details.” – Larry Niven

My books on Amazon 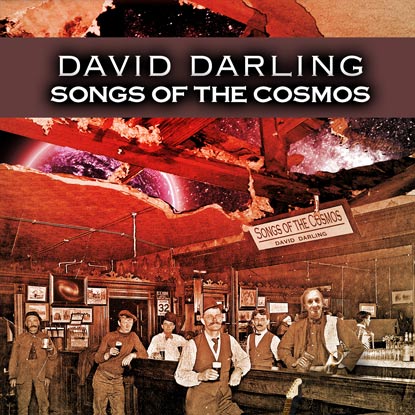