THE SUN: Our Neighborhood Star - Questions and Answers

Q. How long does it take light to go from the Sun to the Earth?
A. Just 8 1/3 minutes. Light is the fastest thing of all, traveling at more than 186,000 miles per second.

Q. How long does it take the Sun to turn once around on its axis?
A. About 25 days.

Q. Does this mean that the Sun is a giant star?
A. No. In fact, scientists call the Sun a "yellow dwarf." It is an ordinary star that only seems big and bright because it's so close.

Q. What's the closest that a spacecraft has ever come to the Sun?
A. About 28 million miles (45 million kilometers). The probe Helios 2 came to within this distance of the Sun's surface in 1976.

Q. Which substance was found on the Sun before it was found on Earth?
A. The gas helium. Its name comes from the Greek word helios, meaning Sun. Tell-tale dark lines in the Sun's spectrum led to its discovery.

Q. What causes sunburn?
A. Ultraviolet rays from the Sun. Some of these invisible rays manage to pass through the Earth's atmosphere and reach the surface, where they can damage our skin.

Q. What is a rainbow?
A. A giant spectrum in the sky. It is caused by raindrops – each working like a tiny prism – that break up white light from the Sun into its different colors. 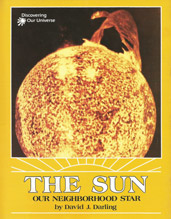 2. Journey to the Center of the Sun

4. The Birth and Death of the Sun