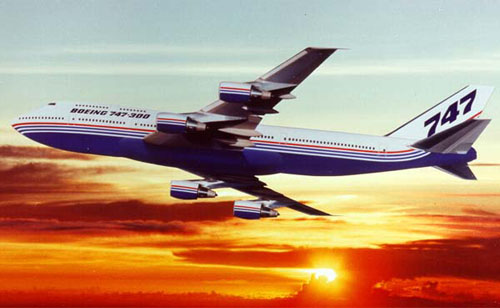 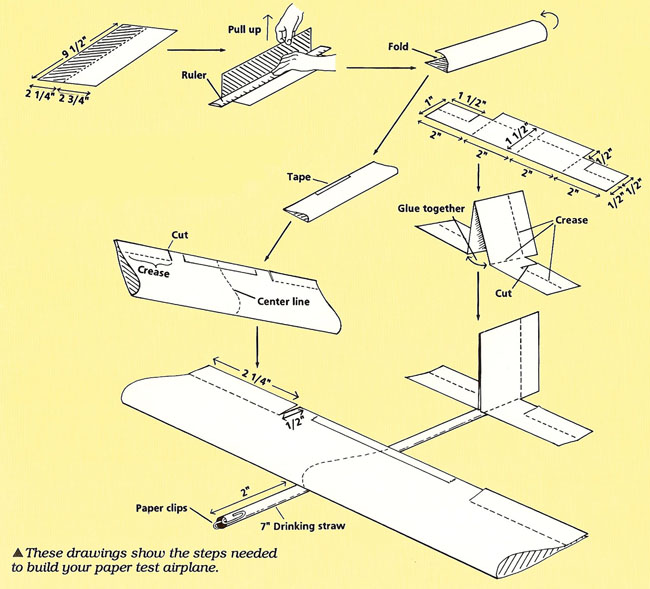 Figure 2. These drawings show the steps needed to build your paper test airplane. 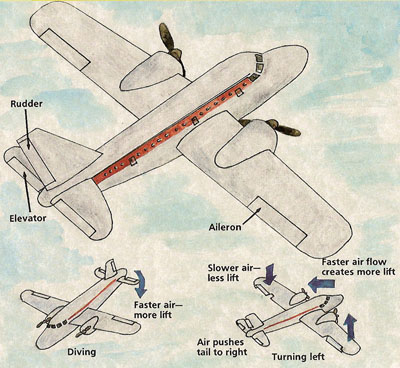 Figure 3. Changing the position of an airplane's flaps causes it tu turn left or right and to gain or lose altitude. 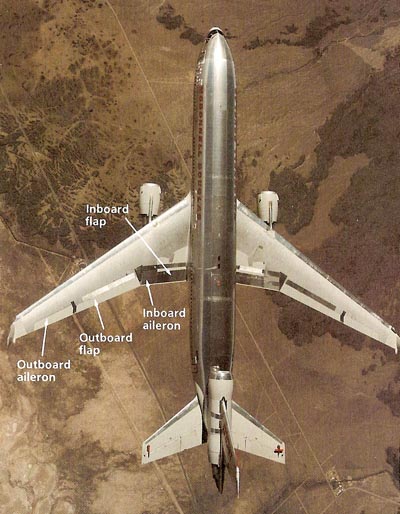 Figure 4. Viewed from above, an airliner's control surfaces on its wings and tail are clearly visible. 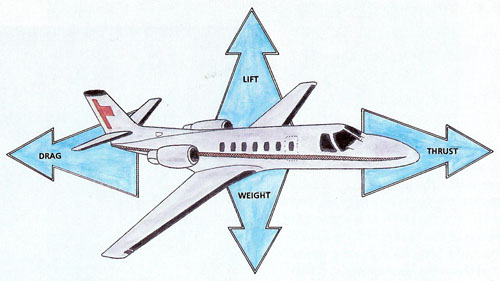 Figure 5. The four main forces that act on an aircraft. 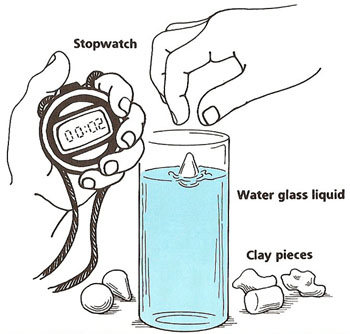 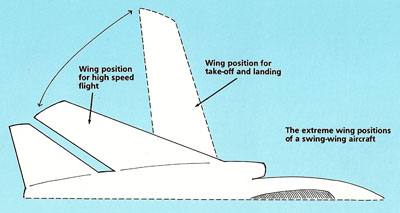 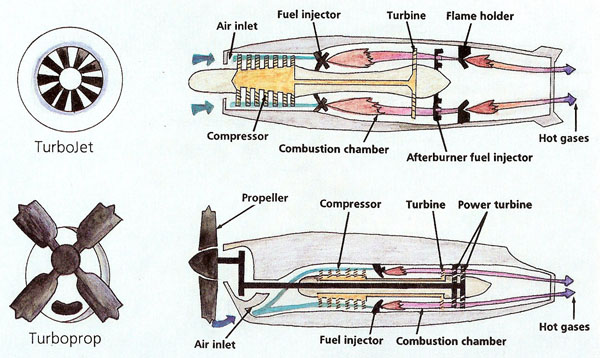 Figure 8. A turbojet engine (top) is much more powerful than a turboprop engine (bottom).

A plane must also have some means by which to go fast enough. Only if the air flows over the wings above a certain speed will the lift be sufficient for the craft to leave the ground or stay in the air. In order for a jumbo jet to take off, for example, it must normally be traveling between about 165 and 182 miles per hour. As it climbs, it goes faster and faster, until it levels out at a height of about 32,000 feet and a cruising speed of around 570 miles per hour.

At this stage, you may choose to test your wing in the wind tunnel. Test the wing with the flaps level, with both up or down, and with one up and the other down. What do you notice? What does this tell you about how the wing may behave in flight?


Taking it further:
Design your own plane with wings of different shapes and sizes. Use other materials such as balsa wood or Styrofoam. Test the planes thoroughly both in the wind tunnel and in free flight. Keep a record of all you results.

Hinged flaps, called AILERONS, on the trailing edge of an aircraft's main wing can be moved up and down by the pilot. If an aileron is raised, this slows the air moving over the upper surface of the wing, thereby increasing its pressure. As a result, the wing has less lift. If the aileron is lowered, the air speed over the upper wing surface is increased, which decreases the pressure. So, in this case, the lift becomes greater.

If you have the chance to visit an airport or to sit near the wing during a flight, watch carefully how a plane's flaps are positioned to control its flight.


A Battle of Forces

To move forward the plane must use its engines. These produce a forward force known as THRUST. Thrust is needed to make the plane go at a sufficient speed for the air rushing over the wings to produce enough lift. Acting in the opposite direction to thrust is the resistance of the air on the plane's wings and body. This resistance is called DRAG.

Pour water glass into the container until it is about three-quarters full. Drop each of the shapes in turn from the surface of the water glass and use the stopwatch to time how long it takes for each to reach the bottom. Which shapes travel fastest? What does that tell you about the amount of drag acting on them?

Try dropping other objects such as marbles, coins, nails, and so on. Observe carefully how they move.

Warning: Water glass should not be swallowed. Wash your hands and clean up thoroughly after the experiment.

Engineers have to try to keep both the weight and the drag force as low as possible when they are designing a new aircraft. Using lightweight yet strong metals, such as aluminum, helps to maintain a low weight. But drag is a more complicated problem. Even the slightest unevenness in the surface of a wing or a plane's body can raise the drag force by a large amount.

Using wind tunnels and computer calculations, researchers experiment with different wings, tails, and bodies to find an overall shape that will slip through the air easily, yet still provide the plane with enough lift. A good shape, over which the airflow moves smoothly, is said to be STREAMLINED.

Make paper planes with wings of different shapes and sizes – some narrow and sleek, others broad and rectangular. What differences do you observe in their performance? Which planes work best thrown hard and which are better at slow gliding?


A Choice of Wings

Look at the different types of aircraft shown on these pages. Look also at the photographs of both military and civilian planes. What do you notice?

Aircraft designed to fly at very high speeds, such as jet fighters, have very thin bodies. Their wings are narrow and swept back. The reason for this is that the drag force acting on an object rises very rapidly as its speed increases. For example, if a plane goes from 500 to 1,000 miles per hour, the amount of drag on it rises by a factor of four. So, it is essential that such a plane offers as little resistance as possible to the air flowing over it.

On the other hand, sleek, sharply angled wings do not give much lift. This is not a problem when moving fast, since the amount of lift increases with increasing speed. But it does mean that high-speed jets need powerful engines to enable them to take of quickly and climb steeply.

Planes that are designed to travel more slowly are not so seriously affected by drag. Their wings are wider and stick out more from their sides so that they can obtain plenty of lift even at fairly low speeds.

The best of both worlds is a plane that can alter the shape of its wings in flight – a so-called "swing-wing." One of these is the Panavia Tornado, a multipurpose fighter member capable of bombarding other planes in the air or attacking ground targets. For takeoff and for flying at low speeds, the Tornado�s wings are kept straight out from the sides. But as the aircraft gathers speed, its wings are moved into their swept-back position. This greatly reduces the drag on the plane and also allows it to make very sharp turns during aerial combat.

Until the 1940s all planes were powered by one or more spinning PROPELLERS. A propeller is basically just a twisted airfoil. As it spins, it squashes the air that flows over it so that there is a higher pressure region behind the propeller than in front of it. Because of this pressure difference the plane is pushed forward.

A JET ENGINE also has a system of revolving blades inside. These make up what is called a compressor. As the blades of the compressor spin around, they suck air in and squeeze it to 10 times its normal pressure. The air then enters a special chamber where it is mixed with fuel and burned. The hot exhaust gas from this burning mixture shoots out of the back of the jet engine and so provides the plane with a forward thrust. The escaping gas also turns around a big fan known as a turbine, which is connected to the compressor to make it turn.

Being much more powerful than a propeller engine, a jet enables modern planes to fly at very high speeds – in some cases, over 2,000 miles per hour. A jet engine also works more efficiently than a propeller at high altitudes where the air is thin. 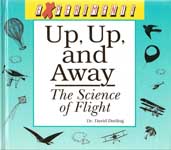