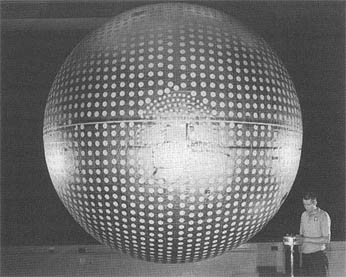 ADE (Air Density Explorer) was a series of balloons, made from alternating layers of aluminum foil and Mylar polyester film, placed in orbit to study the density of the upper atmosphere and the relationship between solar radiation and air density. The Air Density Explorers were developed at NASA Langley and had a diameter of 3.7 m (12 ft) and a mass of 7–9 kg. All were launched from Vandenberg Air Force Base.

Although Explorer 9 was the first such balloon launched (as well as being the first satellite placed in orbit by an all-solid-propellant rocket and the first to be successfully launched from Wallops Island), only its three identical successors were officially designated "Air Density Explorers."

ADE was a subprogram of NASA's Explorer series.