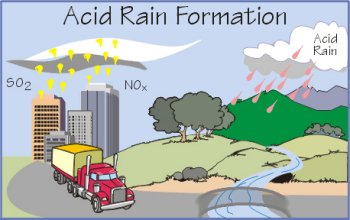 How acid rain is formed.

The principal natural phenomena that contribute acid-producing gases to the atmosphere are emissions from volcanoes and from biological processes that occur on the land, in wetlands, and in the oceans. The effects of acidic deposits have been detected in glacial ice thousands of years old in remote parts of the globe. Principal human sources are industrial and power-generating plants and transportation vehicles. The gases may be carried hundreds of miles in the atmosphere before they are converted to acids and deposited.

Since the industrial revolution, emissions of sulfur and nitrogen oxides to the atmosphere have increased. Industrial and energy-generating facilities that burn fossil fuels, primarily coal, are the principal sources of increased sulfur oxides. These sources, plus the transportation sector, are the major originators of increased nitrogen oxides.

The problem of acid rain not only has increased with population and industrial growth, it has become more widespread. The use of tall smokestacks to reduce local pollution has contributed to the spread of acid rain by releasing gases into regional atmospheric circulation. The same remote glaciers that provide evidence of natural variability in acidic deposition show, in their more recently formed layers, the increased deposition caused by human activity during the past half century.