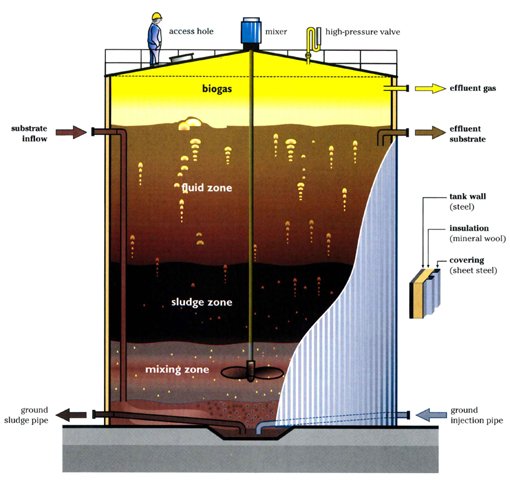 Anaerobic digestion, which takes place in three stages inside an airtight container, produces biogas. Different kinds of micro-organisms are responsible for the processes that characterize each stage.

Anaerobic digestion is the complex process by which organic matter is decomposed by anaerobic bacteria. The decomposition process produces a gaseous by-product often called biogas, which consists primarily of methane, carbon dioxide, and hydrogen sulfide. It occurs in nature and can be used to produce biogas from biomass in an anaerobic digestor. Here's how anaerobic digestion works.

Methane is the major component of the natural gas. It is odorless, colorless, and yields about 1,000 Btu (252 kilocalories) of heat energy per cubic foot (0.028 cubic meters) when burned. Natural gas is a fossil fuel that was created many millions of years ago by the anaerobic decomposition of organic materials. It is often found in association with oil and coal.

Anaerobic decomposition occurs naturally in swamps, water-logged soils and rice fields, deep bodies of water, and in the digestive systems of termites and large animals. Anaerobic processes can be managed in a digester (an airtight tank) or a covered lagoon (a pond used to store manure) for waste treatment. The primary benefits of anaerobic digestion are nutrient recycling, waste treatment, and odor control. Except in very large systems, biogas production is a highly useful but secondary benefit.

Biogas produced in anaerobic digesters consists of methane (50–80%), carbon dioxide (20–50%), and trace levels of other gases such as hydrogen, carbon monoxide, nitrogen, oxygen, and hydrogen sulfide. The relative percentage of these gases in biogas depends on the feed material and management of the process. When burned, a cubic foot (0.028 cubic meters) of biogas yields about 10 Btu (2.52 kcal) of heat energy per percentage of methane composition. For example, biogas composed of 65% methane yields 650 Btu per cubic foot (5,857 kcal/cubic meter).

Anaerobic decomposition is a complex process. It occurs in three basic stages as the result of the activity of a variety of microorganisms. Initially, a group of microorganisms converts organic material to a form that a second group of organisms utilizes to form organic acids. Methane-producing (methanogenic) anaerobic bacteria utilize these acids and complete the decomposition process.

In the thermophilic range, decomposition and biogas production occur more rapidly than in the mesophilic range. However, the process is highly sensitive to disturbances, such as changes in feed materials or temperature. While all anaerobic digesters reduce the viability of weed seeds and disease-producing (pathogenic) organisms, the higher temperatures of thermophilic digestion result in more complete destruction. Although digesters operated in the mesophilic range must be larger (to accommodate a longer period of decomposition within the tank [residence time]), the process is less sensitive to upset or change in operating regimen.

To optimize the digestion process, the biodigester must be kept at a consistent temperature, as rapid changes will upset bacterial activity. In most areas of the United States, digestion vessels require some level of insulation and/or heating. Some installations circulate the coolant from their biogas-powered engines in or around the digester to keep it warm, while others burn part of the biogas to heat the digester. In a properly designed system, heating generally results in an increase in biogas production during colder periods. The trade-offs in maintaining optimum digester temperatures to maximize gas production while minimizing expenses are somewhat complex. Studies on digesters in the north-central areas of the country indicate that maximum net biogas production can occur in digesters maintained at temperatures as low as 72°F (22.2°C).

Other factors affect the rate and amount of biogas output. These include pH, water/solids ratio, carbon/nitrogen ratio, mixing of the digesting material, the particle size of the material being digested, and retention time. Pre-sizing and mixing of the feed material for a uniform consistency allows the bacteria to work more quickly. The pH is self-regulating in most cases. Bicarbonate of soda can be added to maintain a consistent pH; for example, when too much "green" or material high in nitrogen content is added. It may be necessary to add water to the feed material if it is too dry or if the nitrogen content is very high. A carbon/nitrogen ratio of 20/1 to 30/1 is best. Occasional mixing or agitation of the digesting material can aid the digestion process. Antibiotics in livestock feed have been known to kill the anaerobic bacteria in digesters. Complete digestion, and retention times, depend on all of the above factors.

The material drawn from the anaerobic digester is called sludge, or effluent. It is rich in nutrients (ammonia, phosphorus, potassium, and more than a dozen trace elements) and is an excellent soil conditioner. It can also be used as a livestock feed additive when dried. Any toxic compounds (pesticides, etc.) that are in the digester feedstock material may become concentrated in the effluent. Therefore, it is important to test the effluent before using it on a large scale.