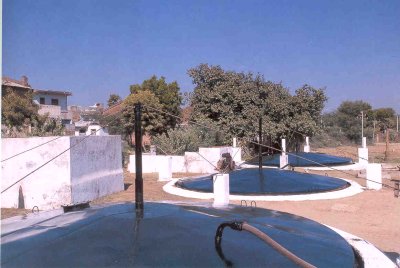 Biogas is a combustible gas created by anaerobic decomposition, or fermentation, of biomass – organic material (including animal dung, human sewage, crop residues, and industrial and municipal wastes). It is composed primarily of methane (up to 60%), which is the combustible component, carbon dioxide, and hydrogen sulfide.

Biogas is produced in an air-tight container, called an anaerobic digester, and is used as a fuel to heat stoves, lamps, run small machines, and to generate electricity. The residues of biogas production are used as a low-grade organic fertilizer. Biogas fuels do not usually cause any pollution to the atmosphere, and because they come from renewable energy resources they have great potential for future use.

The International Energy Agency estimated that, in 2005, 185 anaerobic digestion plants had the capacity to process 5 million metric tons of municipal solid and organic industrial waste to generate 600 MW of electricity. The potential for biogas production is much larger. A report by the CIVITAS Initiative estimates that European biogas production could satisfy 12–20% of European natural gas consumption.