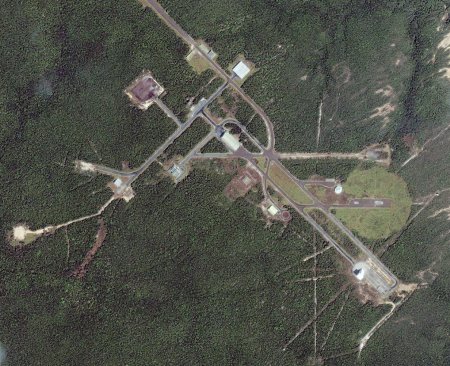 IKONOS satellite image of the Alcantara launch site taken on Sep 5, 2001. At lower right is the launch pad destroyed by an explosion in 2003. © Space Imaging.

Alcantara is Brazil's launch center, located in a jungle setting on the Atlantic coast near Sao Luis, in the northeastern state of Maranhaoat, at coordinates 2° 17' S, 44° 23' W. Being close to the equator it can launch satellites into orbits with inclinations of 2° to 100°. The site became operational on Aug 19, 1994. Pads are set up for the Sonda 3/4 sounding rockets, meteorological rockets, and other science launchers, and for Brazil's indigenous VLS booster.

On Aug 23, 2003 a VLS exploded days before its scheduled launch, killing 21 people and injuring more than a dozen others. The explosion destroyed the VLS-1 V-03 rocket designed to carry two satellites into orbit. One of the four main boosters on the rocket ignited, causing a massive explosion that sent a thick plume of smoke in the air over the Alcantara Launch Center.