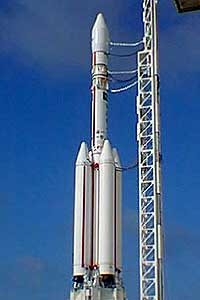 VLS is a four-stage Brazilian rocket comprised of a core and four strap-on motors. The first, or booster stage, has four solid fuel motors strapped to the center second-stage core motor. Much of the rocket motor technology used on the VLS is derived from the Sonda-3 and Sonda-4 sounding rockets. The VLS is designed to deploy 100- to 380-kg satellites into 200- to 1200-km equatorial circular orbits, or to deploy 75- to 275-kg payloads into 200- to 1000-km polar circular orbits. Configured as a missile, the VLS could fly 3,600 km with a 500-kg nuclear payload. Launches are from Alcantara.

The first launch of the VLS ended in failure on November 20, 1997, when it was destroyed 65 seconds into the flight. According to reports, the rocket was off course and tilting to one side because one of the four solid rocket propellant strap-on motors failed to ignite. In December 1999, a second VLS had to be destroyed just three minutes into the flight when the rocket again veered off course. A third qualification flight had been scheduled for August 25, 2003; however, the rocket exploded on the pad three days before this during final preflight processing.